Our world is a life-size art gallery.

Just like any other masterpiece, it was once a dull picture of black and white…

But that was until Mother Nature decided to splatter colours all around the canvass we call “home”.

In this mini-series, we’re going to show you the different shades of the world by listing amazing attractions in passionate red, playful orange, sunny yellow, calming green, frosty blue, flirty pink, romantic purple, and so much more!

Get ready to feast your eyes upon a kaleidoscope of colours ’cause we’re bringing you to 8 crimson-coloured sites — the first in our shades of the world series!

If someone has to describe this crimson wonder, that’ll be the most perfect definition.

This breathtaking marsh is literally red as far as the eye can reach—that’s all thanks to the presence of seepweed, a plant that only thrives in highly saline areas.

Known as the world’s largest wetland, this red beach in China is green throughout most of the year; make sure you visit just in time for autumn.

Live your Fast and the Furious dreams in this totally whack car-themed amusement park in UAE!

Situated in the second most populated city in UAE, it’s not surprising this first ever Ferrari-branded park gets a booming 1 million plus visitors annually.

Aside from a wide variety of thrill and family rides, Ferrari World in Abu Dhabi set the record for having the biggest space frame structure in the world. In addition, it also houses the world’s fastest roller coaster.

Seems like Daigo-ji temple is a shades-of-the-world-hoarder because it looks splendid in all colours, in all seasons.

This proud temple stood for more than thousands of years and has endured both the test of time and the wreckage of war.

Although its beauty picks no particular time, the maple trees around Daigo-ji temple glows vivid red starting from mid September until November.

Directly translated as the “The Red Wall”, La Muralla Roja certainly deserves a spot on our list of crimson shades around the world.

A whimsical display of patterns and symmetries highlighted these fort-like apartments near the coast of Calpe, Spain.

Ricardo Bofill, the brilliant mind behind the masterpiece, took inspiration from the Mediterranean tradition of casbah in completing the project.

While this might look like some scene from Game of Thrones, the building is actually a sacred wat (temple) in Thailand. The place has lacked proper maintenance after a scandal broke loose during the 80’s.

The dragon’s interior includes a staircase, although in apparently poor condition. Some visitors claim that there are lots of noteworthy spots inside waiting to be discovered.

Unfortunately, due to the deterioration of the site, some parts have been closed to the public.

No need to ask about the flower field’s splendour—this sunny little girl’s smile is proof enough.

The flowers’ grandeur reach their peak around the month of May, a month before their buds are cut off for the bulbs.

Eloquently conveying red as a stunning shade of the world, this British tulip bulb field in Norfolk is undoubtedly every blossom-lover’s paradise.

Say you missed the item’s title; what if I told you this isn’t a dried-up Martian land, or a land in general?

Did it blow your mind? Yes? Wait ’til I tell you this lake can turn animal corpses into stone.

Lake Natron, one of the most alkaline lakes in Africa, is a lethally beautiful area with 10.5 pH level and temperatures rising up to a blazing 140 degrees Fahrenheit.

Species who can’t adapt to the lake’s crazy-high sodium content will surely face their untimely deaths in no time.

Shortly after their deaths, these unlucky carcasses will turn into statues via Sodium Carbonate mummification. Medusa who?

Does this place makes you wanna “Giuchie, Giuchie, ya ya dada“?

Located along the vibrant city of Paris, Moulin Rouge is a historical icon of cabaret industry in the country.

The “most famous cabaret in the world” is still as alive as it was 125 years ago. You should go visit and see for yourself!

The Hitachi Seaside Park in Japan is sprinkled with balls of red plants known as Kochia. From afar, this tourist destination looks like a bunch of giant cherries.

The red tinge of the blooms goes full on between September to October, thus being coined as “the prelude to autumn.”

Either you’re a flower enthusiast or just want to marvel at nature’s play of colours, you can never go wrong in choosing this park.

Red Shades Of The World In A Nutshell

Travel destinations in extreme colours like red scream for attention and it’s best to give them just that! It’s the colour of passion, intensity, and love.

As we’ve seen this shade in different parts of the world, there’s no denying that nature has a way of being phenomenal and fierce at the same time.

For a much needed boost of passion, consider visiting places with this hue for stimulus!

That’s a wrap for the first part of our Shades of the World Series! Stay tuned for more colour-coded travels! And if you know of any more amazing travel destinations in the shade of red, leave us a comment below…

For the meantime, don’t forget to pin this image for quick reference >> 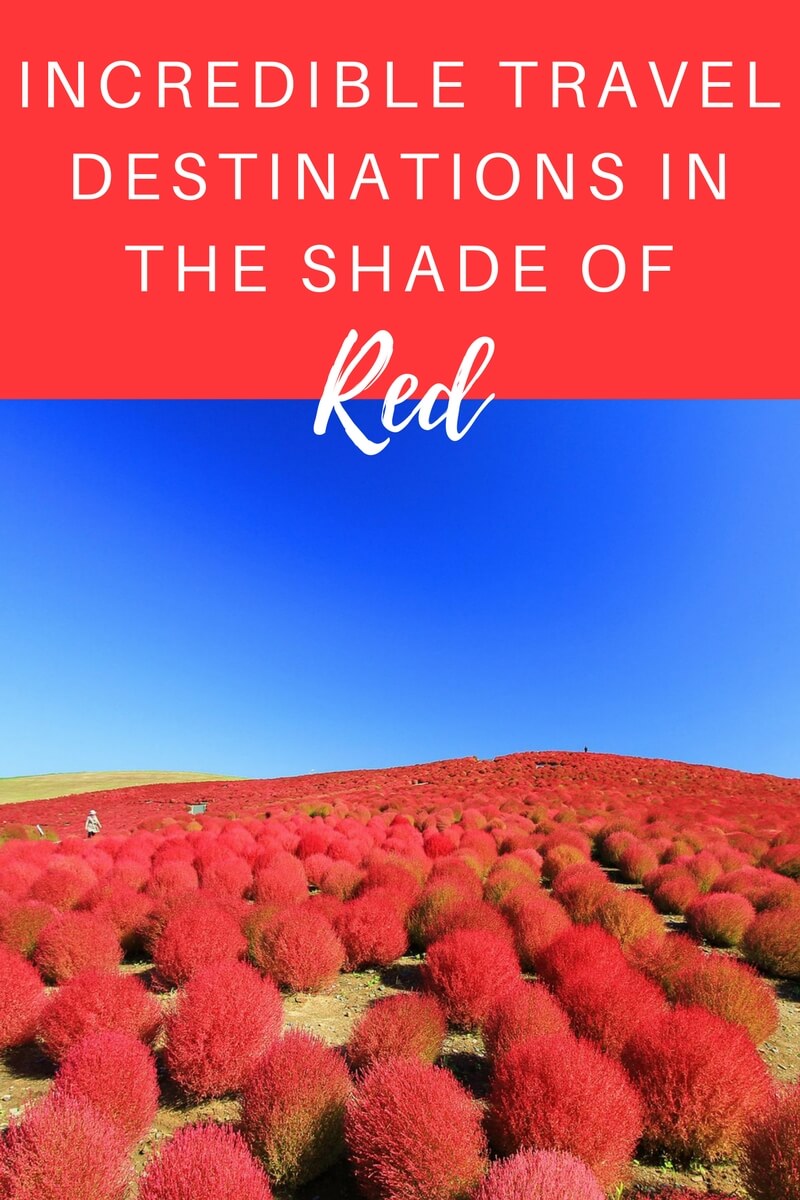