After a year of travelling and living in Brazil I finally made it to Florianópolis, possibly the most raved about city in the country. I’d been nagging Dan to go there since before even arriving in Brazil but life got in the way and Florianópolis kept on getting pushed further and further down our to-do list.

On a random day in April though, plans came about to go on a little adventure. Our Airbnb in São Paulo was being rented out to someone else for a week so we decided to use the time to attend this amazing event in Rio de Janeiro before eventually landing ourselves in Florianópolis for another business event and some chill time.

If you haven’t heard of Florianópolis, it is the capital city of the southern state of Santa Catarina and it is located on an island called Ilha de Santa Catarina. Home to 42 incredible beaches, some large and rugged, some quiet and protected, Florianópolis is a popular holiday destination among Brazilians and their Argentinian neighbours. As I said in this post, I knew Florianópolis would resonate with me because of its laid back atmosphere and proximity to the ocean.

Being the really organised couple that we are, we actually missed our flight from Rio de Janeiro to Florianópolis which was really upsetting because a whole string of events were messed up as a consequence, including having to pay for another set of last minute tickets. But the most ridiculous thing was that we arrived at the airport well before our flight was due to leave and we were literally sitting in our gate while they were calling our names. We were just completely oblivious to the line of people getting on the plane. It wasn’t until 10 minutes after the plane had left that I went over to the staff to ask about our flight. Yes, we felt stupid. Yes, we blamed each other. Yes, we went to bed grumpy that night.

Anyway, we eventually made it to Florianópolis the next morning and in a giant rush Dan caught an Uber to his event while I ventured into the city centre to check-in at our hotel. I didn’t even leave the hotel that day because the weather turned into a monster and I literally thought I was in the middle of a cyclone. So bed was where I stayed, working all day.

Things to do in Lagoa da Conceicão

Lagoa da Conceicão is a district located in the south of Ilha de Santa Catarina and it comprises the largest lagoon on the island, a number of beautiful beaches, a whole zone of sand dunes, lush green hills and a range of top shops, restaurants and cafés.

We decided to leave the city centre at about 12pm the next day so we could head into Lagoa da Conceicão for lunch. Checking in at Hotel Saint Germain, which was literally located on the lake, we were excited to enjoy some tranquility surrounded by nature.

Dotted all around the lake are a variety of different hostels, pousadas (guesthouses) and hotels to stay in, depending on what kind of experience you want to have in Florianópolis. If you want to find out more about where we stayed, please read our review of Hotel Saint Germain.

On the afternoon of our arrival we thought it would be a nice idea to walk down to the town center of Lagoa da Conceicão which has become one of the most popular spots in Florianópolis for it’s nightlife and social scene. Even though it was only about a 10-15 minute walk from our hotel, we got lost and ended up strolling through a field to get there. This would have been a beautiful experience except an out of control cow decided to turn on its owner and run away… directly towards us. Now, if you’ve never experienced a cow charging at you, let me just tell you, it’s extremely distressing. It must have missed me by half a metre before turning around and having a go at Dan. Luckily, it eventually calmed down and left us in peace.

Side note: Ask your hotel for directions into town before trying to be Bear Grylls.

Naturally, we got out of the field as fast as possible, only to be met by the road that would take us directly into the town centre. After that heart-pumping frenzy, the first thing we did was stop by Açaí Villa Roxa to calm ourselves with the sweet, sweet taste of Brazil’s favourite ‘superfood’, açaí. It’s not really much of a superfood once it has been blended up with spoonfuls of sugar and topped with condensed milk, but it tastes amazing nonetheless.

At Açaí Villa Roxa you can pretty much choose any topping you like on your açaí. It’s just like those frozen yoghurt places but with açaí instead. We decided to go healthy(er) by topping ours with fruit but if you have a sweet tooth and do fancy going a little crazy, they have everything from granola to fruit to kit-kats. Yum. 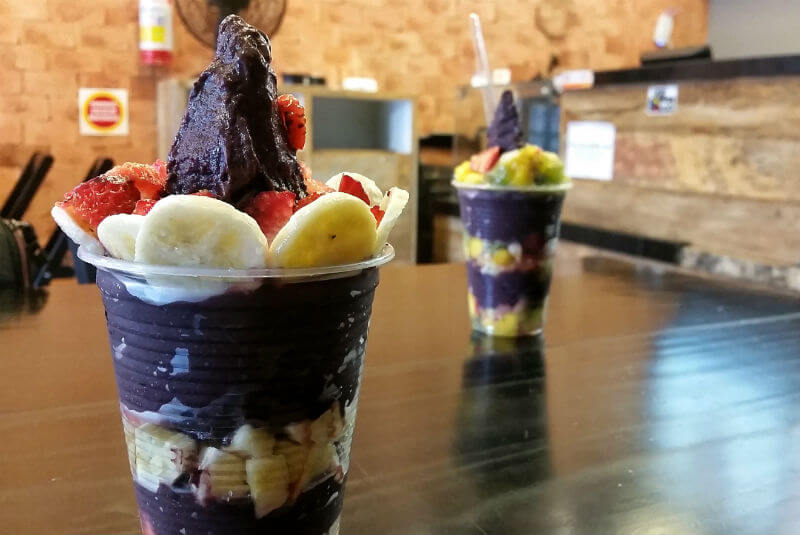 After devouring our açaí we needed to find a nice café where we could get some work done. Just a few minutes walk down the road we came across Café Cultura, which was located right in the centre of town. Dan had been before and enjoyed it so we decided to grab a couple of chairs and order a coffee each.

Wow, not only was the space really cool and edgy, the coffee was amazing. In fact, it might have been the best coffee I’ve had to date in Brazil. I wouldn’t be surprised if the owner has been to Australia because the coffee definitely sent me on a journey back to my motherland.

The internet did cut out a couple of times but that’s no surprise here in Brazil. Staying for cheesecake and a cheeky beer as dusk began to approach, we soon realised that Florianópolis starts getting mighty cold around this time of the year (April – September). Pack accordingly!

We ended the night in one of Florianópolis’ top rated pizzerias, Pizzaria Basilico, which was located just down the road from our hotel. Joining some old friends, we sipped red wine and feasted upon some delicious pizzas, including one with asparagus and honey and another with tomato and basil. I’m not usually much of a pizza person but I can truthfully say, these were good.

The atmosphere at Pizzaria Basilico is remarkably warm and cosy with an old authentic European feel to it. This is the perfect restaurant to go during the colder months if you’re looking for somewhere comfortable with great service.

The next day, after checking out of our hotel, we called a taxi to come and take us to Barra da Lagoa. What was originally meant to be a quick trip to one beach turned into an insightful tour around a number of prominent places surrounding Lagoa da Conceicão. The first was Joaquina. And by the way, the taxi driver was lovely and spoke English, so don’t be afraid to ask for a little tour of your own!

Joaquina is a popular beach destination in Florianópolis, especially among local surfers but it is also well known for it’s incredible sand dunes where visitors can go sand boarding. Unfortunately on the day we visited it was quite cold and windy so we didn’t fancy getting out of the car for too long. We did capture some video footage so you’ll get to see that on our Youtube channel soon. Nevertheless, I definitely recommend visiting Joaquina on a warm day, especially the sand dunes, they look like a lot of fun.

The next stop on our odd little taxi tour was the tourist viewpoint, located on the top of a steep hill which overlooked the lake below. The view here was stunning and totally unexpected. Make sure your camera is fully charged before you get to the tourist viewpoint because I’m certain you’ll be able to capture some beautiful shots, especially at sunrise and sunset.

Also located at the tourist viewpoint is a small place to grab a coffee as well as a souvenir shop and even a tattoo parlour for when you’re feeling spontaneously rebellious on your timid trip to the lake. 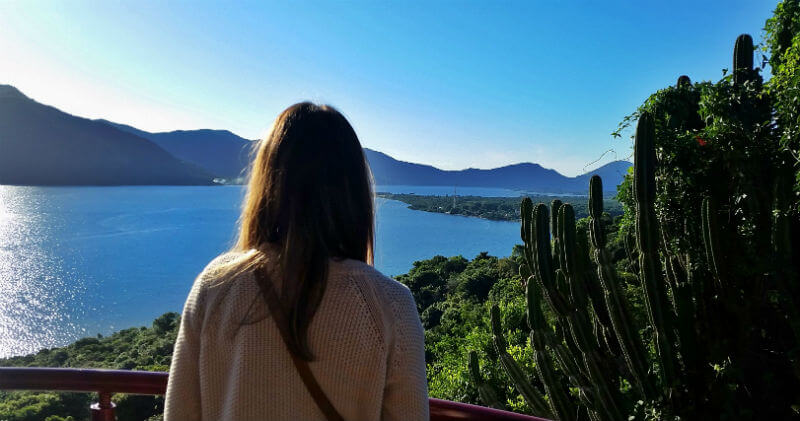 Connecting the ocean to the lagoon is a short canal next to the beach which you can apparently float down as the tide goes in and out. The sky was a little cloudy on the day we went so the water didn’t look as turquoise as it could have but if you go on a clear day during summer I’m sure it would be absolutely incredible, especially because the water stays warm all year round.

At Barra da Lagoa you can relax on the beach, go for a stroll along the canal or eat at one of the delicious seafood restaurants in the area. If that’s not enough exploring for you, take the bridge across the canal to discover a ‘secret beach’… 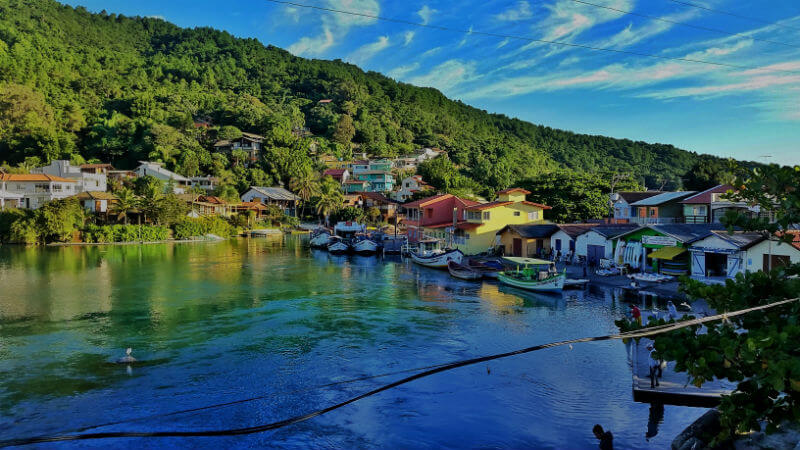 If you cross the bridge over the canal at Barra da Lagoa you can then wind your way through a number of small, colourful alleyways which will eventually take you to a tiny beach called Prainha da Barra. Prainha means ‘little beach’ which perfectly describes what you’ll be looking at. Best reached by foot, Prainha da Barra is overlooked by a few small houses and guesthouses and the rest is quite unspoiled.

Visiting Prainha da Barra is definitely a special memory of mine from Florianópolis because it felt so mysterious getting there through a tiny neighbourhood made up of alleyways only to be welcomed by the cutest beach I’ve ever seen. I would highly recommend adding this to your itinerary of things to do in Lagoa da Conceicão! 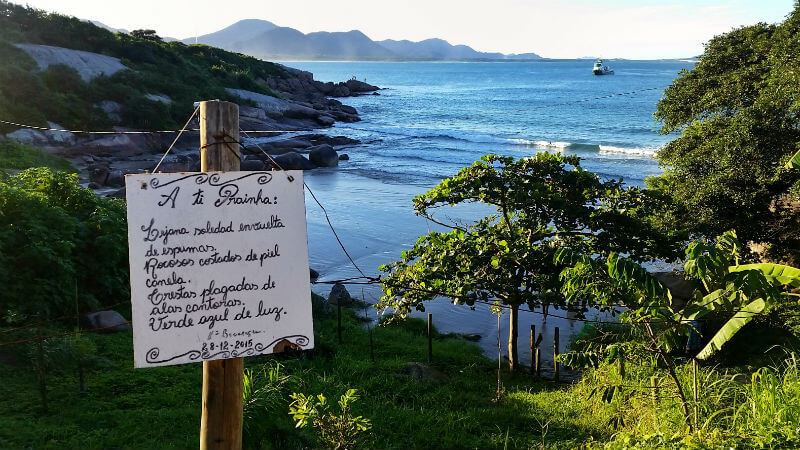 After Prainha da Barra we had a quick seafood dinner before collecting our bags from the hotel and heading to the airport for our return to the airport. There were, of course, many other destinations we wanted to visit in Florianópolis, including Jurerê Internacional and Canasvieiras but they will have to wait until next time. If you do get the time though, please pay these places and visit and let us know what they are like!

Would you add anything else to our list of things to do in Lagoa da Conceicão? Let us know in the comments section at the bottom of this page!

Want more travel tips and inspiration? Come join our travel tribe to learn how you can save and earn money while you travel!