It all began 6 months ago in the north of Thailand, one of the most popular destinations for backpackers to travel due to the low cost of living and easy going lifestyle.

As two young backpackers with a passion for travel, we met and decided to continue the journey as a couple. After several months of living there together, we wondered how possible it would be to buy a cheap used van to travel in over in Europe and then drive it back to Asia.

The idea stemmed from when Dan had been travelling Northern India in 2012. Along his journey he came across two families who had traveled all the way from France by truck and motorhome. Inspired by their passion for exploration and sense of freedom, Dan began doing his research to find out how he could achieve the same.

When I met Dan in December, shortly after arriving in Thailand, I caught the travel bug and decided to jump in on the plan. To begin the process, we started the website as we knew that we’d meet many interesting people with valuable stories worth sharing along the way. We also figured it was a great way to document our travels and allow the world to follow our footsteps. After getting the website up and running, it was then that we started seriously looking into the best options for travelling Europe by van.

Scouring the web for numerous hours, we looked at cheap used vans for travel in Thailand, China, the UK, Germany and various other countries throughout Europe. The UK looked to be our cheapest option but for our budget we concluded that we’d need to buy an empty van and fit it out ourselves. After doing some further research, the Ford Transit came in as the most reliable option to travel long distance as it was cheap and easy to find parts for in the case of a breakdown. The UK is also absolutely full of used Transit vans for sale, making the buying process quite plain sailing.

Our next thought was insurance. Whilst the van was cheapest to buy in the UK, we’d read on a lot of forums that car insurance was quite difficult to obtain for driver’s travelling outside of the country for any longer than 3 months. Luckily, we soon stumbled across a forum that stated that it is actually illegal for insurance companies to deny Compulsory Third Party insurance, whether the van is outside of the UK for longer than 3 months or not. They also have to provide a Green Card which allows access to most other countries within Europe. So, we settled on buying a van in the UK, bought 2 cheap one-way tickets and set off in April 2014, stopping off in Hong Kong along the way.

Upon arrival in the UK we soon realised how expensive it was. Of course, we knew it was going to be considerably dearer than Thailand (one of the cheapest countries in the world) but I guess we adjusted to the simple, inexpensive lifestyle Thailand offered and hadn’t completely changed our mindsets. Searching online for the cheapest hostels we could find within the proximity of Central and Greater London, we were looking at approximately $60 per night for the 2 of us. Without this kind of cash to spare, Dan decided to rent a cheap car to use as our home and means of travel during our search for a used van.

Using an online platform that compares different car rental prices in the area, we hired a Volkswagen Polo at £13 a day for 2 days through a company called Green Motion. Needing the car for an extra 3 days we extended the rental agreement directly through the company which worked out cheaper at £12 per extended day.

After contacting about 15 different private sellers on the Gumtree website, we were on a roll, looking at used Transit vans all over London. Whilst neither of us really knew much about the mechanical side of things, we asked many questions about each van in order to make a clear comparison and work out an appropriate offer.

After 3 nights of sleeping in the front seats of the Polo, we decided to make a low offer of £1,100 on the first van we saw. Originally the seller had the van up for £1,700 but two days later he reposted the ad for £1,400 as he needed to sell it fast. Because there were some bumps and scratches on the van that we wanted to fix, the seller accepted our offer and we began dealing with the insurance. 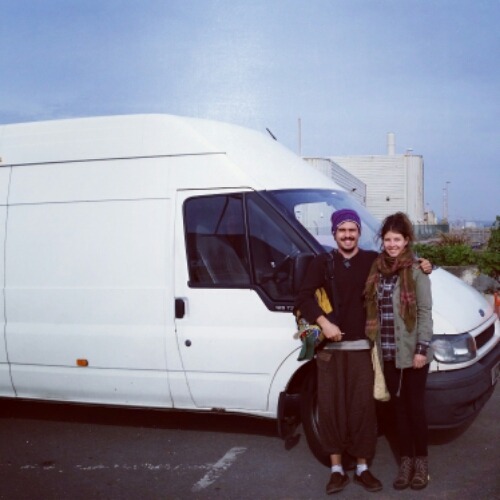 Let me just tell you now… don’t come to England and expect a reasonable price on car insurance. This was our biggest problem. Emailing numerous insurance companies for a quote on Compulsory Third Party insurance, we were faced with prices completely exceeding the cost of the van itself at around £1,600! When an insurance company eventually got back to us with a similar price but for full Comprehensive insurance instead, we took them up on the offer even though we thought the cost was still astronomical. After spending some time going through the verification process and answering many questions, we were faced with a big problem.

Without a British bank account we were told we were unable to pay monthly instalments (a process we assumed we could do on the credit card). Instead, we had to pay the whole cost of the van insurance in full by the end of the month or else it would be cancelled. Upon agreeing, we paid 1/3 of the cost with the other 2/3 3 weeks later.

That afternoon we picked up the Transit van, dropped the rental car back to the company, got out of London and began organising our new home on wheels…

After some tidying up and a visit to the Brighton car boot sale where we were able to pick up many cheap items to decorate the interior for about £20, we’d pretty much created a cosy little home that we can take with us wherever we go… Ok, so it’s not the fanciest home ever but we don’t mind it! 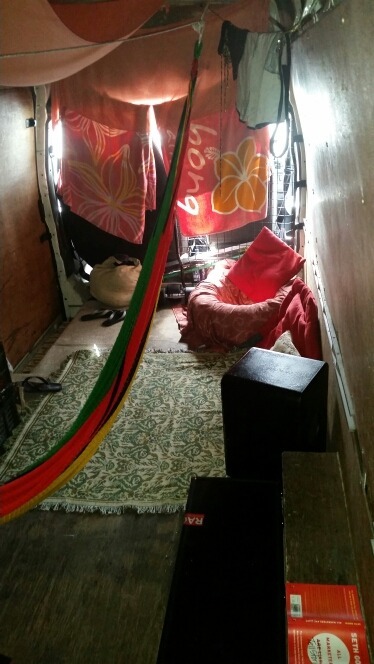 Are you travelling in a van? Or do you plan to buy a cheap used van to travel in? Let’s share ideas! Scroll down and leave a comment at the end of this page!