From opposite sides of the world, our paths crossed in Pai, Thailand (aka a backpackers haven) in December 2013. It was a small, magical village in the mountains of Northern Thailand and our home away from home – a town of the free spirited and we loved it.

Dan and I first met through a good mutual friend who I was catching up with one night in Chiang Rai after about 4 months of little contact. As my friend and I sat in the local hostel, Boonbundan, chatting away about what we’d been up to since we saw each other last, Dan and his friend, also named Dan, came walking.

It was a total coincidence that they had ended up in the same guesthouse as their friend (who was also my friend), 6 hours away from the town they were staying in (Pai). They were on an 8 hour moped road trip to the border for a visa run and it turned out that the only reason they chose the guesthouse we were staying in was because it was called Boonbundan.

A weekend of fun went by and my friend and I were left in Chiang Rai on our lonesome again. I was actually waiting to begin a volunteer project in 5 days time and he was looking for some work (after spending 6 months travelling around Southeast Asia).

It was a Monday and we were bored. We’d already played numerous board games and had stacked the Jenga tower too many times to keep count. Sat in Catbar, a quirky little drinking hole on Jetyod Road, we began reminiscing on our previous moments in Pai.

I’d only been there for 2 days before, so I was curious to see more of this magic that everyone had raved about and he had already been and formed a strong attachment to the village and the people in it, including Dan and Dan. After a short decision making process, we’d bought our tickets to get on the next bus out of there.

Arriving in Pai that evening, we were invited to stay with Dan and Dan in their home, just outside the village. They were also living with one other Aussie guy for a few more days so it was squishy to say the least.

After spending a few more days all together, Dan and I started venturing off on our own. We’d get a coffee and some cheesecake, sit down together on a few cushions and chat about anything and everything. Then he’d grab the scooter and take me places – such as the giant White Buddha that sat on a steep mountain overlooking the village. He’d also invite me to meet his friends at gatherings and to come and watch him play at music gigs.

A week went by and it was time for me to leave. The volunteer project that had specifically brought me out to Thailand this time was to begin in 1 day and I didn’t know how long I’d be gone for. 1 month, 2 months, I had no clue.

Sadly, we had to part ways and try our best to keep in contact over the phone. Dan scootered me down to Pai bus station, with a 15 kg backpack behind me and a 5 kg in front. It was probably the best ab exercise I’ve ever done.

A few minutes later we said our goodbye’s and I was off on a 6 hour bus journey that would bring me back to Chiang Rai.

Introduced to my new home for the next month or 2, I was feeling nervous and uncomfortable but I didn’t expect anything different. I’d volunteered for another organisation in Chiang Rai, teaching English only 4 months prior so I already had an inkling of what to expect.

This time I was to be educating, helping out with homework, doing school runs, preparing food and generally giving company to about 10 children who were living in a home outside of their Lahu tribe.

Although, when I arrived, I knew this was going to go a little differently.

Let’s just say this experience turned out nothing like I had imagined and I knew I was doing more harm being there than not.

The next two weeks were spent cooking and cleaning until Christmas day rolled around. By then I knew being there wasn’t right so I packed up my bags and left the next day to go back to Pai.

When I arrived, 2 more of Dans friends from Chiang Mai had come to stay. So although the Aussie guy had left, we still had 6, sometimes 7 people, with the occasional pop in of a Canadian friend, sleeping in a 1 bedroom home.

It was a beautiful little log home that sat peacefully over a large pond (or small lake as Dan called it). Located approximately 5 minutes scooter commute to the enchanting village centre, we were out in the sticks, yet a hop skip and a jump away from all of the village’s unique happenings. 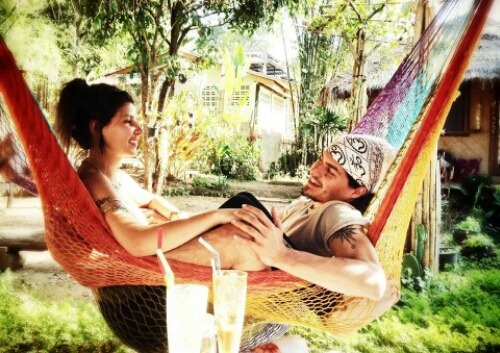 When home, we would spend most of our time out on our balcony, overlooking the floating chill out shack below. Dan would practice his music for nightly gigs at local bars with some other talented musicians. They had a band – The Pairats and they were beginning to become the talk of the town.

I would usually draw, search online for freelance jobs or eat – it was also on this balcony where we started planning StoryV. My other friend would normally play chess all day or hang out at a nearby hostel. The other Dan couldn’t normally be seen – only heard playing flute on the roof or didgeridoo at the end of the driveway. And the other 2 that joined us, Angel and Sky, would either be practicing yoga in the chill out shack, playing didgeridoo around town or twirling fire.

I guess you could say those were our alternative/hippy days.

Throughout our months in Thailand, we formed many amazing relationships with inspiring people from all over the world. And this is one of the reasons we absolutely love to travel so much.

There was this one hostel right in the village centre – Common Grounds – that we couldn’t stay away from (even though we didn’t stay there). To us, this place was far more than just a hostel. It was a community where all travellers alike joined forces to create something special. Everyone bounced off and inspired each other to step out of their comfort zones and give things a go and the results were incredible.

The environment was so stimulating with creativity and productivity on full throttle. People who didn’t know they could draw started producing works of art. Hula-hoops flew around in all directions. Amazing singers would suddenly come out of nowhere. Creative minds would feed off each other. And the amount of talented musicians together in one place was insane. It was really a space no one wanted to leave when they arrived.

As we would sit and observe everything going on around us at the hostel, we were able to gain a much deeper understanding as to why travel is so important for us. In one way or another everyone was being educated and everyone wanted to learn. While one person was teaching someone a chord on the guitar, another was learning a language and someone else was practicing yoga.

We became so interested in how travelling can educate us in ways we never imagine. How it can considerably alter our world view and change our whole way of looking at life. And how much it influences us to find our passions and follow them.

Dans love for music grew immensely after visiting over 35 countries in 7 years of independent travel and that’s because of the people he had met along the journey. The people who had come from all different backgrounds, cultures and communities and shared the same passion. And as they educated & inspired each other, it helped each one of them to grow. So we also look at travelling as a way of growing. A way of becoming who we want to be.

It was coming close to the time when my flight back to Australia was going to be departing. Dan had been planning his next adventure – a road trip in Europe – for some time and he was getting ready to buy his ticket after 10 months in Thailand. I was faced with a difficult decision. Do I spontaneously cancel my flight and go to Europe? Or leave Dan and head back to my every day life in Australia? It took many days to decide, with a number of factors coming into play. I was running out of money. How would I support myself in Europe?

So as I was running low on money and we really wanted to stay and travel together, Dan came up with the idea of starting another blog as well as working together to build an online business. I was excited about the idea, although I knew that I had to be up for a challenge. Did I take the leap?

Of course! And I haven’t looked back since.

Update June 2015: Well, it’s been over 18 months since Dan and I first met in Thailand and we’re becoming closer every day. I’m now writing this little update from our studio apartment in São Paulo, Brazil where we’ll be staying for a little while. It’s definitely been one amazing roller-coaster ride so far and we can’t wait to carry on adventuring together. After leaving Thailand we travelled slowly through Hong Kong, Macau, England, Wales, Scotland, Netherlands and Italy, stopping for Christmas back in our home countries. We have now been travelling in Brazil for almost 6 months and we still have so much to see. Life is good!