Just landed in Amsterdam or got a phenomenal trip creeping up? Well lucky you! Amsterdam is a remarkable city, full of wander and the best way to get wandering is by bicycle of course!

So to get you started, I’ve created a list of 8 ways to avoid failing at bicycle in Amsterdam. Most fails were tried and tested by Dan and myself (sometimes more than once) all for the purpose of this case study of course.

It is said that there are well over 600,000 bicycles in the city of Amsterdam which comes at no surprise when you take a look around. Contrary to most other developed countries, it seems there are more bicycles on the road than cars. And to make it more interesting they don’t just come in typical shapes and sizes. You’ve got:

The old style ‘Mary Poppins’ bicycle as I like to call it: 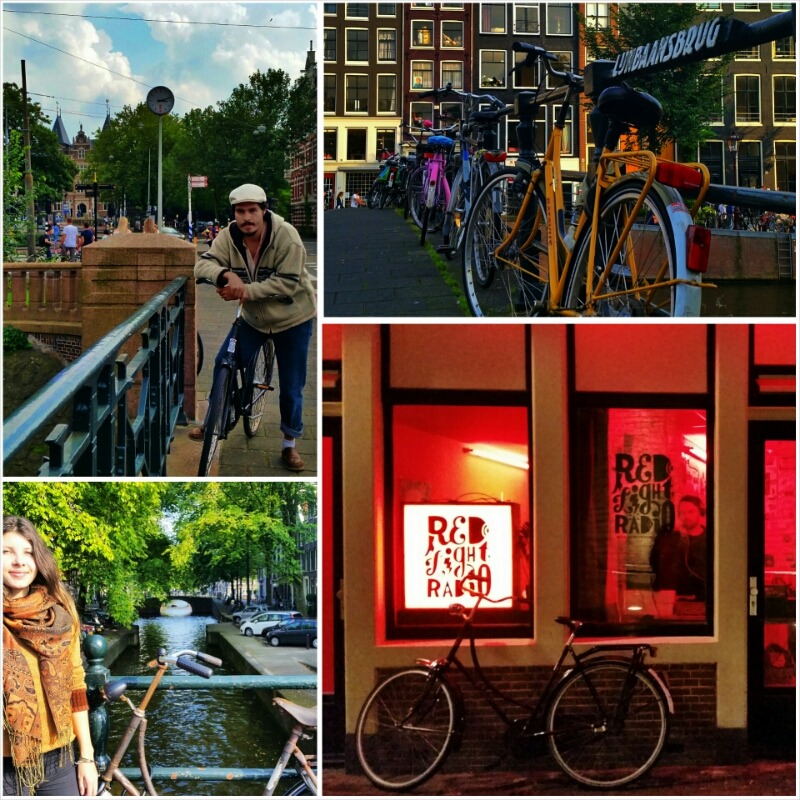 The racing bicycle, much like Dans old vintage Peugeot: 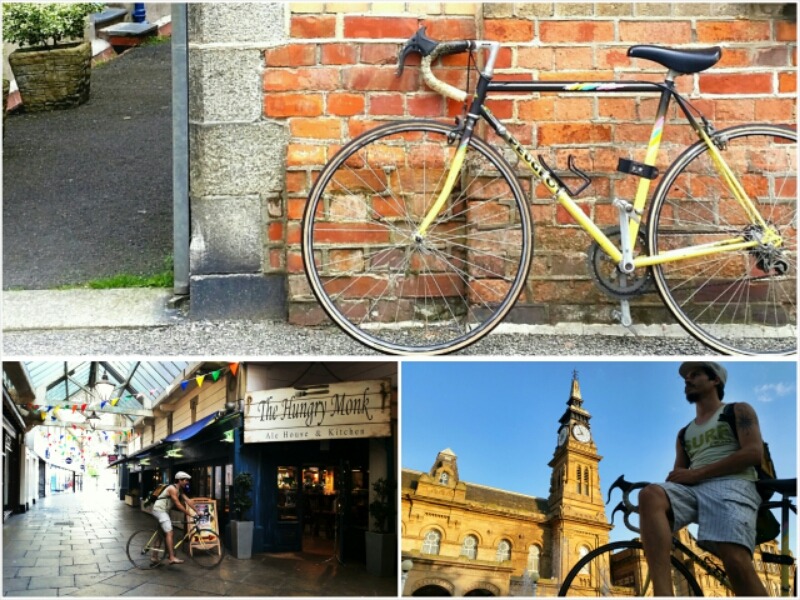 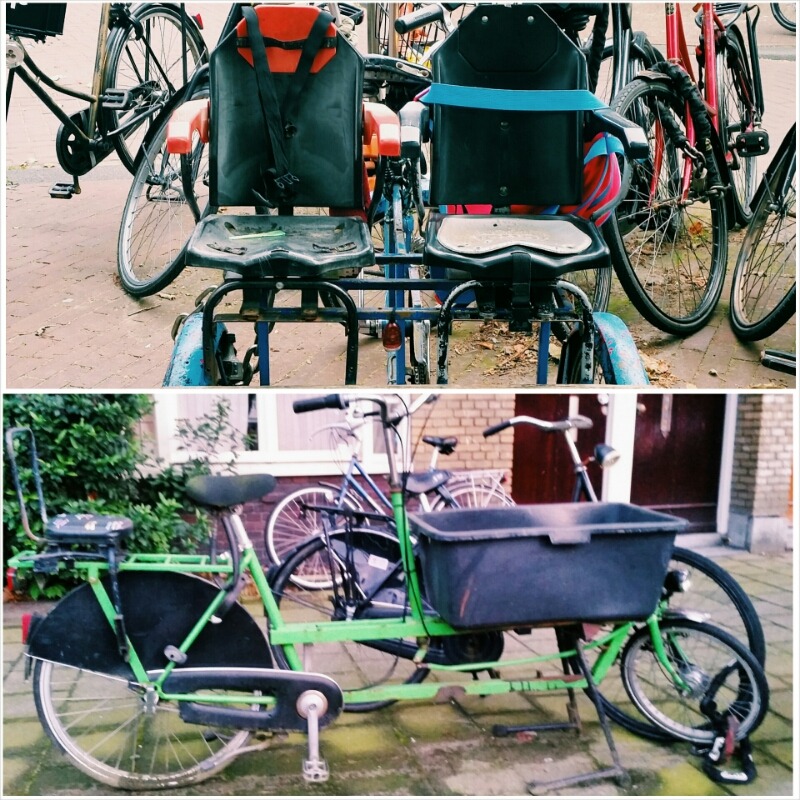 Plus many more variations of these. And on the bicycle path riding alongside you, you may also find: 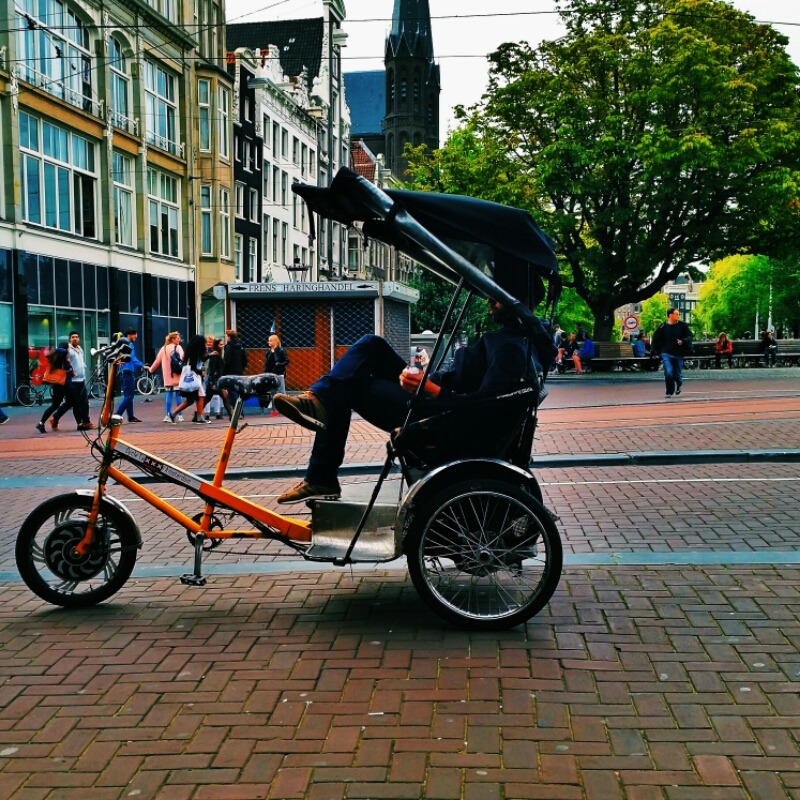 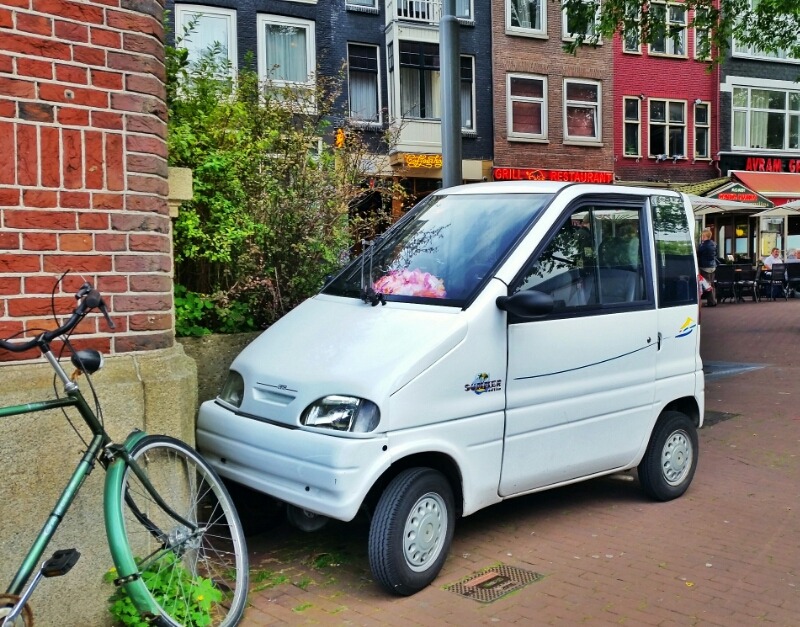 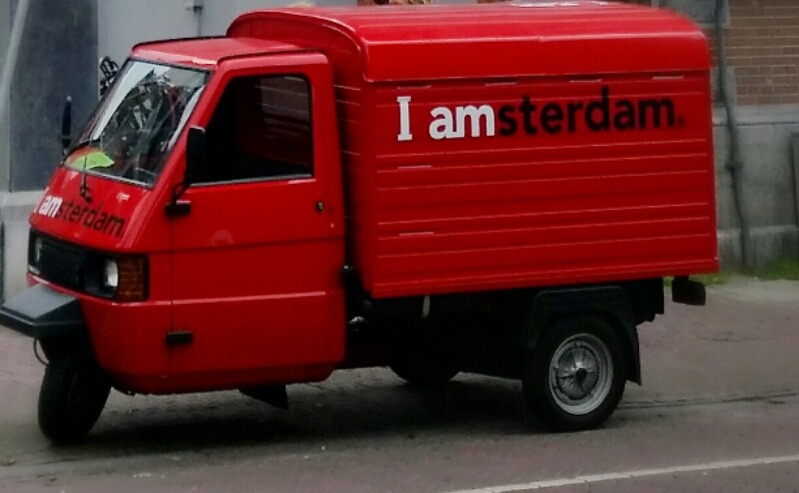 So to return home all in one piece after roaming the city like the locals do, here are 8 ways to avoid embarrassing or painful situations and instead become a pro at riding a bicycle in Amsterdam.

How to not fail at bicycle in Amsterdam

The amount of times Dan has come so close to being completely wiped out by passing bicycles, scooters and even CARS on and off the bicycle path frightens the living daylights out of me. Amsterdam just isn’t the place to wander your way from side to side of the bike path, daydreaming about what flavour waffle you’re going to buy in town – hmm, Nutella or strawberry? No. Amsterdam ain’t got no time for that.

Just remember, passing riders will overtake on your left and you really don’t want to be in their way when they’re on a mission. Either, a, you’ll get yelled and sworn at in Dutch or b, you’ll get a nice warm welcome to Amsterdam upon face planting the ground. Neither are all that fun.

Literally 10 minutes after purchasing our second hand bicycles from Waterloopleinmarkt (the daily flee market) for a bargain of €50 each, we were off. We thought we were rocking the whole local bicycle riding thing until we got out on the road, then our real identities were unveiled – those of clueless tourists. 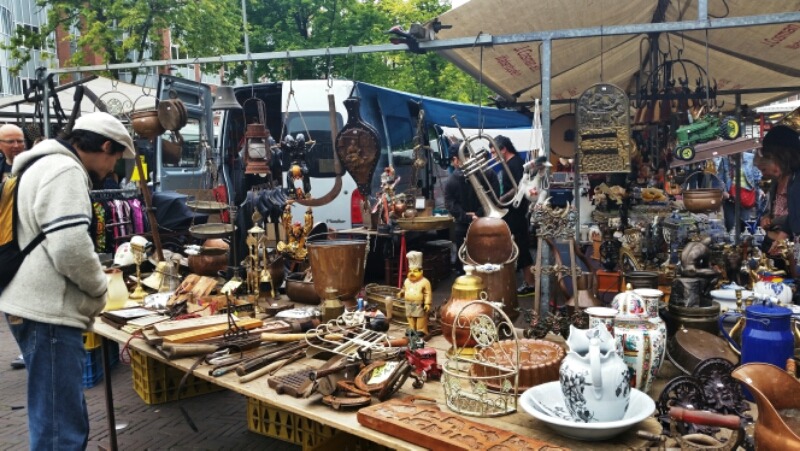 How did we let it slip? Well it might have been that moment we were both riding on the wrong side of the road, only to realise within seconds of almost causing a hectic 4-bicycle pile-up and getting shouted at by 2 Dutch people.

It was so embarrassing, I told myself I’d learn this bicycle thing as quick as I possibly could. Not sure if the same went for Dan.

2. Stay on the bike path when possible

The great thing about riding a bicycle in Amsterdam is that everywhere you go you generally have access to a bicycle path. The tarmac is often smooth and easier to ride on and the demand to maintain a fast pace isn’t so prominent when you’re not competing with cars.

There are a couple of types of bicycle paths and knowing the difference could potentially save you a few bumps and scratches. The most common kind are the one way bike paths on either side of the road, one heading north and the other heading south – easy. The other kind is like a normal road, with both directions going on the one path – and this is the type of path we almost caused a massive crash on. Again, just remember, keep right. 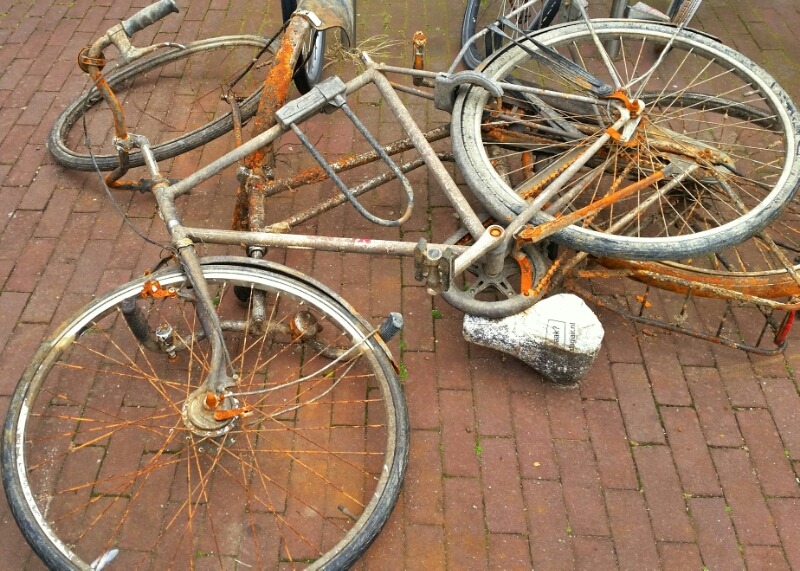 3. Keep up with the pace

Ok, so I say that riding on the bicycle path isn’t so demanding when it comes to keeping up a swift pace BUT that doesn’t mean you should ride like a snail. The majority of people in Amsterdam ride bicycles and the majority of those people have jobs and places to be (sometimes just a good party) so don’t be that annoying bicycle rider in the way, holding up an entire line of people on a tight schedule. 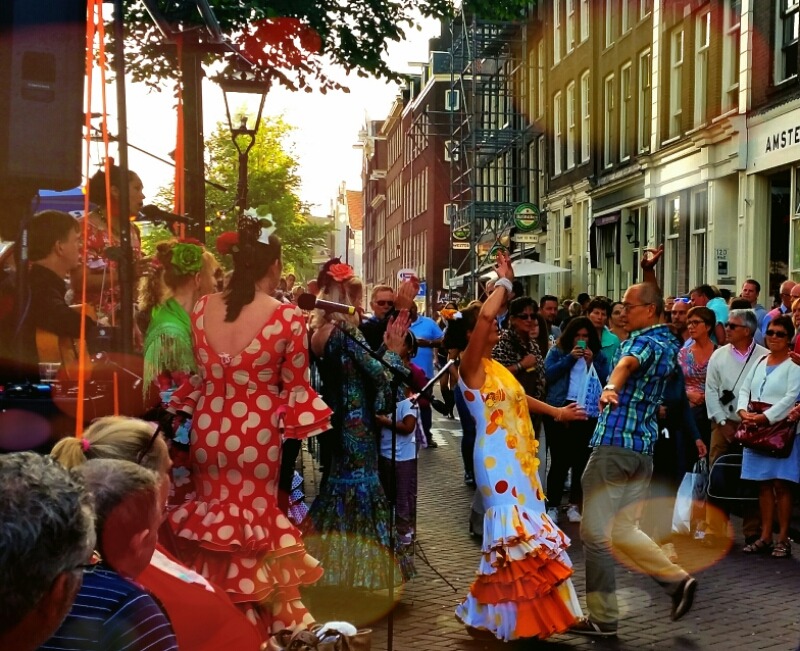 Keep a steady pace going when you can and everything will run a lot smoother. Stopping all of a sudden for no particular reason will piss people off because it means that they have to build up momentum again and also find somewhere to slot back into the line of traffic.

Always use your eyes and ears. It sounds obvious but trust me, riding a bicycle will soon make you realise just how unaware you can become of the little things going on around you.

You’re going to have bicycles, scooters and even small cars on the same path as you so being completely aware and listening out for others around you is extremely important. Scooters go a lot faster than most bicycles so listen out, keep right and let them pass. 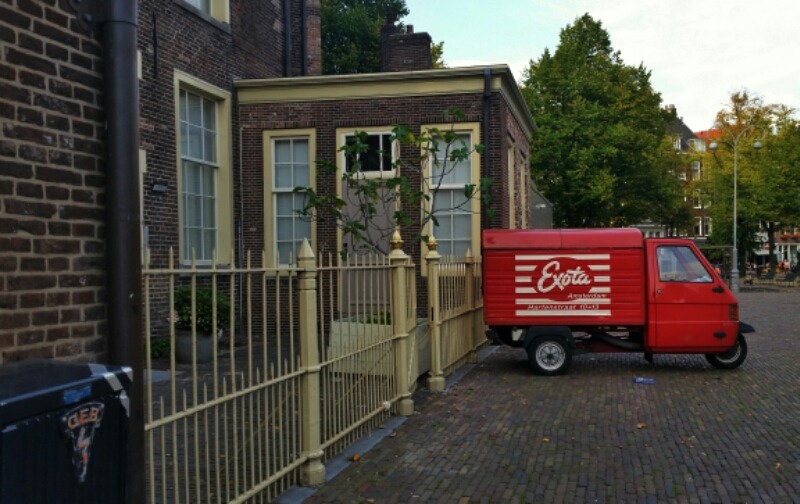 Just like when you’re driving a car, texting and Candy Crushing on your mobile phone is a big fat no. Well, Candy Crushing in general is just a big fat no but mixing it with the task of balancing on two wheels whilst making your way through a crowd of 100 bicycles on a two-way bike path is plain dangerous. Honestly, you’re looking for a broken nose.

Anything you do, any move you make, make sure others on the road know about it. Pretend you’re a car (beep beep). If you’re going to turn left, stick the indicator on. If you’re going to overtake someone, stick the indicator on, look over your shoulder and ring the bell a few times to let the person in front know. Use your arms, even when making small manoeuvres. It’s not difficult and it will certainly keep you out of trouble in traffic. 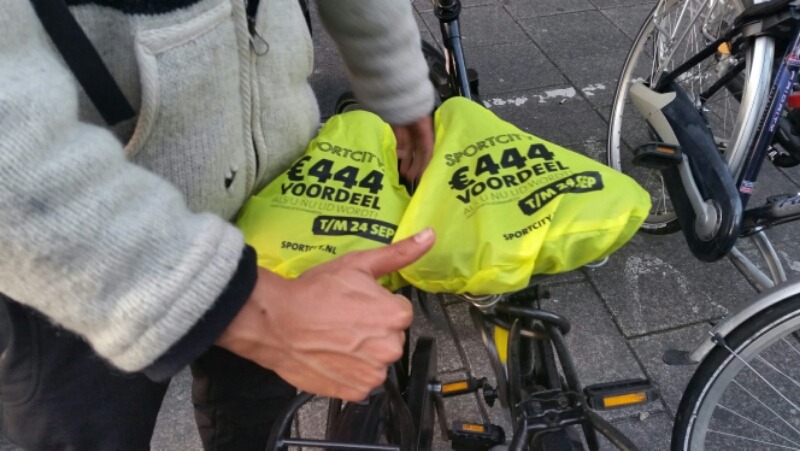 Since arriving in Amsterdam and purchasing our own bicycles we’ve come to realise the importance of a bell. Not only are they cute on My Little Pony bicycles but they are also very handy when riding through large crowds of people dawdling through the city. Instead of approaching every person in your way with “excuse me”, “beep beep”, “sorry, coming through”, just get your ding-dong on. People move instantly. You know when a local is around because you can hear them ringing their bell repeatedly from a mile away.

Yes, there are traffic lights for bicycles too and I’d highly suggest stopping at them when they turn red. For some reason when people are on bicycles they tend to think that road rules don’t exist and that stopping at red lights (not to be confused with red light district) is for amateurs. The thing is, half the time you don’t know what angle cars are coming from on the road, not to mention the trams, so just waiting your turn (literally 1 minute) is a seriously safer option.

7. STAY AWAY FROM THE TRAM TRACK

You may be wandering why I’ve capitalised this one as though I’m screaming it. Well, as embarrassing as it is, the first and only time we’ve ever fallen off the bicycle while tandem riding (long story) was when we steered right into the tram track in front of a load of people in the city centre. The mass of tram tracks in Amsterdam could possibly be the most nerve-racking, terrifying thing about the city for bicycle riders – and I’m sure many have formed this fear through experience. 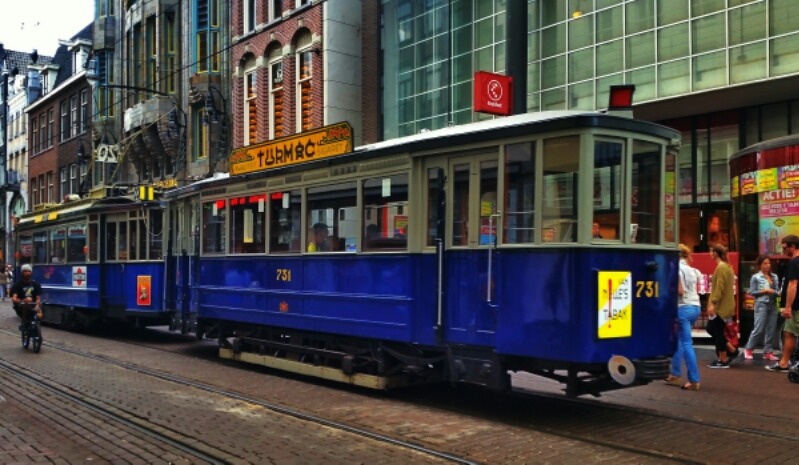 Dan was riding and I was balancing side-ways on the back (just like everyone does here) on our way to Bloemenmarkt to fix the punctured tyre on my bicycle that I’d left behind. It seemed as though we’d got the hang of it until one wrong steer of the handle-bars sent us scooting through the metal groove in the road and threw us both to the ground. Embarrassed, we quickly got up and brushed ourselves off but the funny thing was an onlooker turned to her friends straight after and said “yep, I’ve done that”. Somehow, that alone made me think that this happens to some poor bugger every day in Amsterdam.

Stay away from the tram tracks. If you do have to cross, make sure your wheels are going against the grain. If your wheels get caught in the groove, you’re more than likely going to be thrown off your bicycle. Not to scare you or anything.

Trams are also much wider than the track itself so when riding make sure you give them more than enough space to get through. The same goes for when you are walking on the side of the road too.

Another fail on my behalf brings this last one to the table.

Riding along in my new slip-on sandals (Converse didn’t match my outfit, ok?) I was struggling to keep up with Dan as we made our way back home one evening. I could see Dan overtaking the man in front and then getting smaller and smaller in the distance. It was dark and I’m not the best Kung-fu fighter so I decided to try my best to catch up. 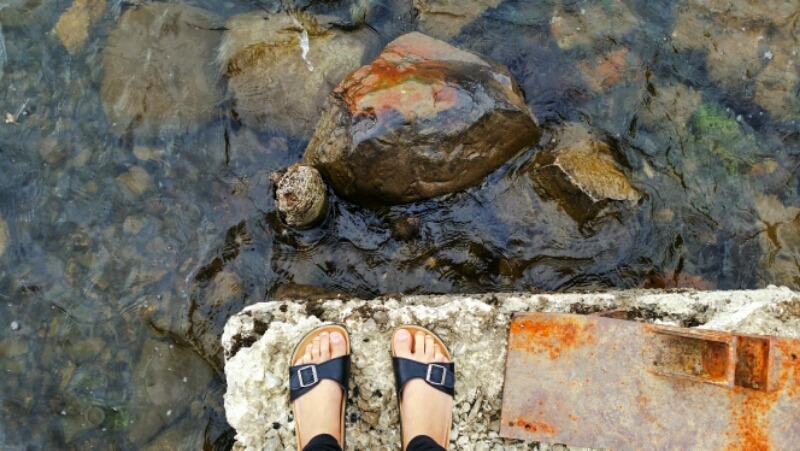 I began peddling, faster and faster until at one point my legs were peddling so fast one of my shoes flicked off my foot into the air and I couldn’t slow down quick enough to get it. Metres down the path I was able to stop and park my bike when the man I overtook whilst peddling my ass off came riding down to me holding my shoe. He handed it over with a displeased look on his face (well I guess my flying shoe could have seriously injured him) and gave me a little lecture.

So now I’m lecturing you – wear secure footwear whilst riding a bicycle in Amsterdam. Or anywhere for that matter. You don’t want to put someone in hospital for copping a shoe to the face.

So, are you feeling ready to get rolling?

Your turn! Have you taken to two wheels in Amsterdam yet? How did you go? Share your experience below!