When it comes to travel inspiration I don’t think there’s anything better than sitting down with a cup of tea and watching travel videos of normal people with normal amounts of money jump out of their comfort zones and take on the world.

You see, too many of us say we want to travel more but then never actually try hard enough to make it happen. And clearly it’s not impossible – even if you think it’s too expensive, you have kids or you’re really busy – because if these people can do it, so can we.

So today I wanted to show you 5 different travel videos that have made a hugely positive impact on both of us and inspired us to create adventure in our lives every single day, whether we’re at home or in a foreign city on the other side of the world.

5 Incredible Travel Videos That Will Inspire You To Travel More

Casey Neistat – if you don’t already know who he is you’ve been living under a rock. Casey is only one of the world’s most talented and likeable vloggers, no biggie.

Based in NYC, USA, Casey takes us with him on a daily journey through life in the big apple along with some other cool places when he feels like travelling. He has a wife and two kids who often make appearances as well as the most pimped out office/studio you’re ever likely to see.

Beginning his daily vlogs just over a year ago, Casey has since rocked Youtube’s world, amassing an average of 794,298 views per video, with most hitting way over 1,000,000 views. One of his most watched videos (which went hugely viral) is from the time he snowboarded through New York. That got over 13,000,000 views.

If you haven’t been living under a rock and do know Casey’s work, maybe you’re yet to see this one – the Nike video (even though it has been viewed nearly 18,000,000 times). He was paid by Nike to make a film about what it means to #makeitcount but instead, in typical Casey form, he decided to spend the entire budget on a trip around the world. It lasted an incredible… 10 days.

Here’s what came of it:

4. Walter Chang: We Call This Home – 3 Years Around The World

This travel video is one out of two videos on Walter Chang’s Youtube channel and the dude was lucky enough for it to get some serious traction. Or, maybe it wasn’t actually anything to do with luck. Maybe it was just because he made an epic video that was destined to inspire hundreds of thousands of people to set out and explore the world.

Walter is a photographer from NYC, USA who runs the website, We Call This Home. After travelling through 60 countries in the space of 3 years he decided to set up a Kickstarter campaign to fund the creation and launch of a presumably phenomenal hardcover travel photography book.

At the same time, he made this travel video which comprises hundreds of clips from his adventures around the world. It’s awesome and now I want to go everywhere.

3. Thrilling Heroics: Live Your Life Like A Damn HERO

I can’t remember when I first came across Cody’s awesome blog, Thrilling Heroics but I was motivated to go and have another snoop around recently when we were featured directly below him on a popular article written by a mutual contributor to our blogs.

Basically, Cody is a pretty cool dude – an entrepreneur who lives a life of adventure and passion. He blogs about travel, entrepreneurship and lifestyle design and does a pretty good job of causing people to quit their jobs and live out their dreams.

He even created a massive mentoring group called Digital Nomad Academy which encourages and helps people who are bored with their mundane careers to step out of the rat race and build a life and business they don’t need to escape from.

This video, edited by Cody himself, will open your eyes, expand your mind and motivate you to live your life like a damn hero.

Forgive me if you’ve already seen this travel video, but I only recently came across it on Facebook and was immediately inspired to travel more, create more and just be more.

Parker, Ryker and Alexy are 3 good friends who have been creating videos together since they met in high school. After graduating from university they moved in together and started up a Youtube channel (High on Life). After a while they decided to give up their lease and set off on a big adventure around the world, visiting 14 countries in 7 months.

Of course, they had an epic time, caught the travel bug and never wanted to stop – so they didn’t. They made travel & video production their full time gig and have been high on life ever since. In fact, right now they are on a crazy American road trip in a giant blue ‘High on Life’ RV and they’re leaving it up to their viewers to decide where they venture to. Oh and somewhere along the way they’ve picked up an extra crew member.

This is an incredible travel video they put together with a bunch of short clips from 3 years on the road. Whilst the videography is total travel inspiration in itself, it’s the voiceover that does it for me.

3 years of travel in 3 minutes by the guys from High on Life:

1. Fun For Louis: Join The Adventure

Louis Cole is hands down our favourite daily travel vlogger. Every-single-one of his travel videos sparks a sense of wanderlust within that makes us dream about travelling even more than we already do (how that’s possible, I don’t know).

I first came across Fun For Louis when I was about to meet Dan in his motherland, Brazil for the first time. Dan and I had already made plans to spend some time in Rio de Janeiro so we were researching things to do, places to stay, etc.

At this time Louis was actually in Brazil with his family, going about his daily vlogs as per usual when Dan came across one of his Rio de Janeiro travel videos. He sent it to me and we’ve been hooked ever since, virtually following Louis on his adventures around the world (and he does get around quite a bit).

Dan and I have watched him fly around Africa in a tiny blue airplane, road trip through America in a massive RV, hang out of a helicopter whilst hovering over NYC, get hit by a drunk driver in South Africa and fall romantically in love with another amazing travel vlogger (plus way more pretty amazing stuff) all in the space of a year.

After being in the spotlight with his daily vlogs for a while now (like, 1,156 vlogs worth), Louis has recently taken a step to the side, working closely with a team in order to grow an awesome community and help others to ‘live the adventure’ as well. You can sign up to be in the club for free and start creating a life you absolutely love!

Watch this travel video to put your wanderlust in overdrive:

After watching all of these travel videos I feel more motivated than ever to keep on striving to live more meaningfully whilst helping others to do the same. I mean, we even created a Youtube channel.

Wouldn’t it be cool if everyone started doing something more adventurous every day and sharing it with the world? We’d all be high on life, inspiring and pushing one another to reach greater heights and making the most of what we’ve naturally been given – 2 feet and a world of possibilities.

For more solid travel tips and inspiration and to learn how you can save and earn money while you travel, be sure to grab your copy of our eBook, 12 Steps To Full Time Travel (free for now!) 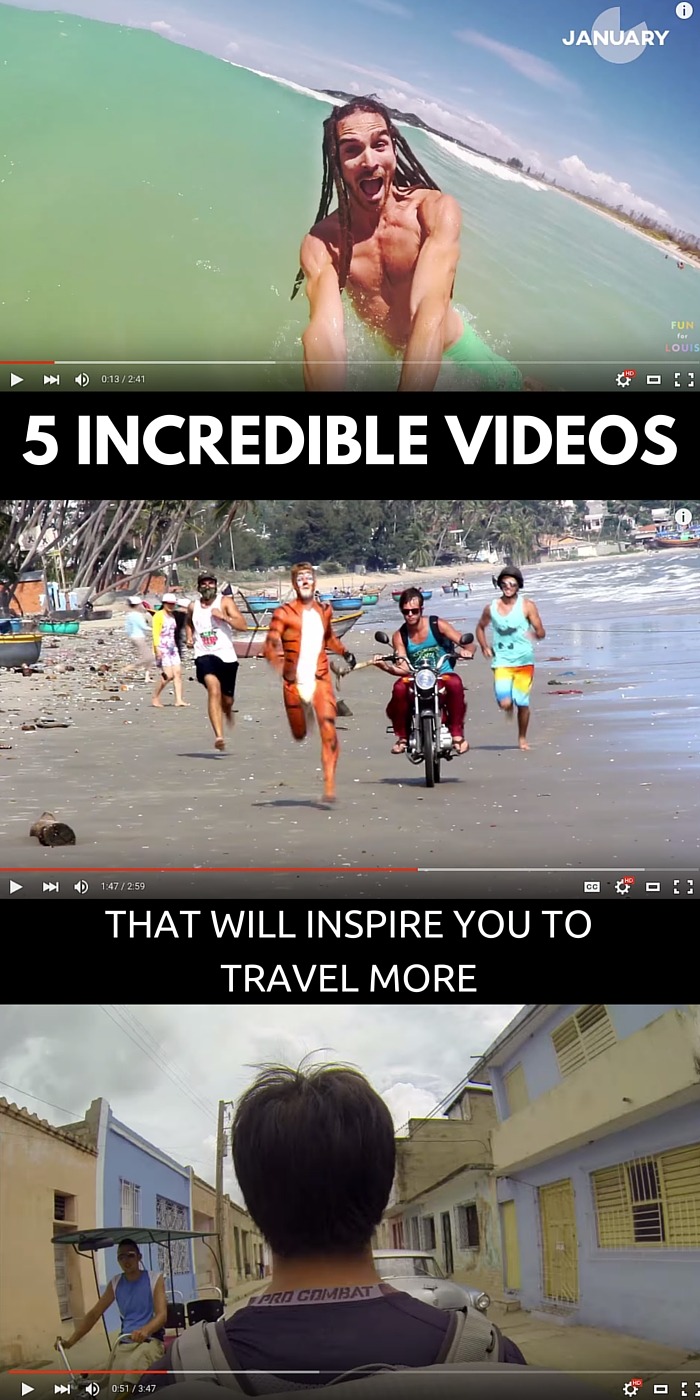