Asia is a large continent with a rich and thriving culture from the various people who inhabit it.

However, more curious perhaps are the hidden histories behind natural and man-made feats in each corner of this vast and marvellous continent.

We’ve surveyed the seasoned writers at Scholar Advisor and here are 13 mystery landmarks in Asia they recommend for you to discover.

Check out everything from those often-visited tourist spots, to the outright eerie curiosities… 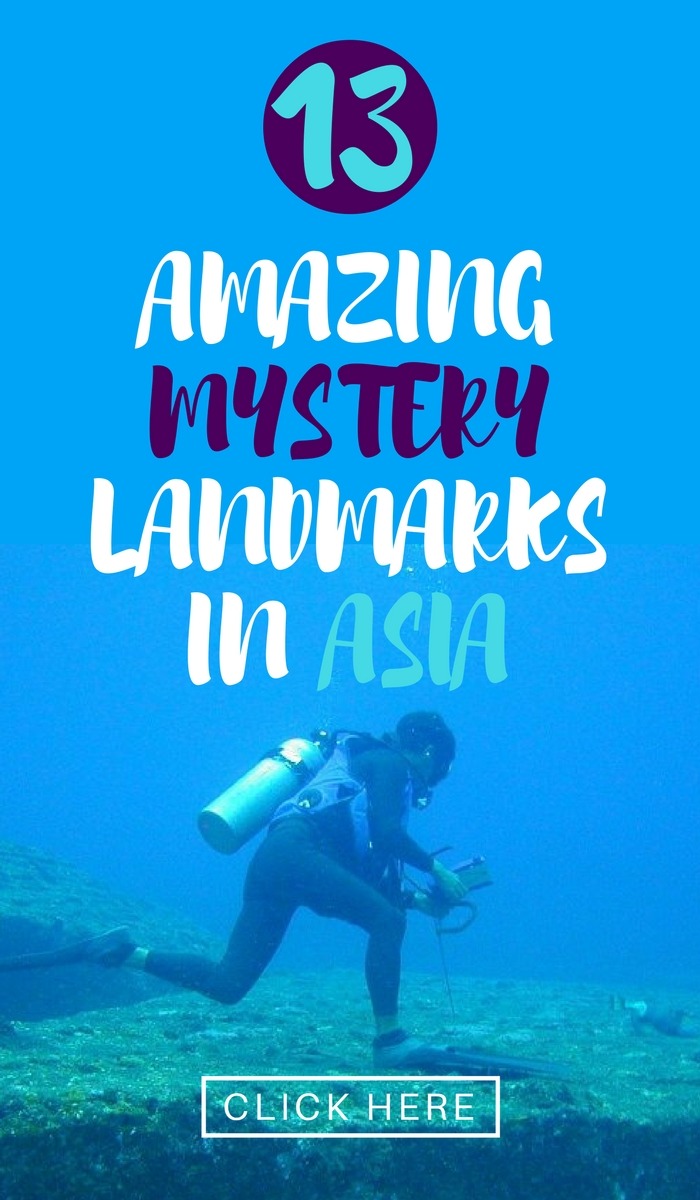 The Yonaguni ruins of the Ryukyu Islands in Japan have attracted the imagination of many underwater explorers.

This Atlantis-like ancient city lies nestled in the depths of the ocean, having only been discovered in 1995 by a sport diver.

Initially thought to be a natural creation of the ocean, further architecture unearthed shows that the thousand-year-old wonder is actually the remnant of a long-forgotten civilisation.

Surrounded by breathtaking natural beauty, Angkor Wat in Cambodia showcases the amazing craftsmanship of the mysterious Khmer people who had built it long ago.

The complex appears to be a religious site for the god Vishnu, which can be seen in the patterns on the great city.

Despite its decline after the disappearance of the ancient Khmer civilisation, Angkor Wat still holds a breathtaking view for any passing tourist.

Straight out of a sci-fi novel, the purpose of the Masuda-no-Iwafune of Asuka, Japan, remains unknown.

Some have looked into its possible agricultural purposes, because of its structure, however, its material makes it seemingly impossible to have been built by ancient technology.

Nestled in the forests of Asuka, this amazing creation holds so many mysterious possibilities.

Built in the eighth century, Ratu Boko, also known as King Boko’s Palace in Indonesia, is another beautiful feat of ancient engineering.

The Ratu Boko serves a primarily religious and spiritual function.

Its breathtaking view has been said to capture one of the best sunsets in the world, and ultimately create a feeling of calming peace, as it must have served its creators a long time ago.

Near the bustling market district close to the northern bank of the Yangtze River, the Ghost City of Fengdu, China, is a 17th century recreation of Taoist Hell.

Its abandoned temples and haunting statues of tortured spirits create an eerie feeling amongst passing tourists and locals alike.

Many claim that the dead do haunt these ancient grounds, creating the haunted feeling of the place.

During the Imperial stage in its history, an entire army was buried with China’s Emperor.

The Terracotta Warriors of China appear to be a tribute to these 8,000 soldiers and their horses, with each statue so eerily life-like and intricately detailed.

No two soldiers look alike, which leads some to speculate on the level of craftsmanship these breath-taking statues were created with.

An amazing alien planet awaits tourists who travel to the Socotra archipelago in Yemen.

This curious natural site hosts some of the world’s most unique flora and fauna, making it a wonder how well it has been preserved despite rapid climate change and encroaching human disturbance.

Also known as the “Pearl of the Indian Ocean”, this unique environment is definitely a must-see.

The smooth, rolling contours of the Chocolate Hills in Bohol, Philippines, remains one of the most unique natural creations of all time.

So-called because of its brown colour during the summer, recent mining expeditions have deformed some of these hills, but there remain plenty of sites where tourists can enjoy the untarnished natural view still.

Among the thriving Buddhist temples of Myanmar, the Kyaiktiko Pagoda, also known as the Golden Rock Pagoda, is an amazing natural phenomenon to behold.

Holding in place a giant rock at the edge of a cliff, this site is believed by many Buddhists to be miraculous.

Legend has it that the reason why the rock has not yet fallen is due to Buddha’s hair keeping it tied to the mountain.

Built in honour of one of ancient India’s kings, the Rani Ki Vav stepwell is another one of the incredible landmarks in Asia which reflects the handiwork of people even before modern technology came about.

According to its records, the Rani Ki Vav was commissioned by Queen Udayamati for her late husband.

Its intricate walls and structures reveal a lasting finish as a testament to an undying and eternal love.

The burial grounds of the Trunyan village in Bali, Indonesia, hold plenty of mystery in them.

This ancient cemetery, whose tradition has been kept alive by its people, is surrounded by superstitious belief.

Part of this stems from the burial process itself, where the village people place their dead in bamboo cages to decompose.

Afterwards, the bones are laid out on platforms once the body has fully decomposed – the curious thing noted by many is how the bodies never emit a foul stench.

Another Asian natural wonder, Hell’s Door in Turkmenistan has been dubbed such because of the flames emitted by the natural gases in the area.

Some even consider the place to be truly a gateway to the underworld.

The real wonder, however, is how the flames have continued burning throughout the decades.

The purpose of these jars remains unknown, although some have speculated that they were once used as burial sites for ancient rituals.

However, there are some legends which point to the origin of the jars to giants who once walked the earth.

Over to you! Leave your thoughts in the comments sections below…