Yes, you read the title correctly – 24 hours was the entire duration of our spontaneous Florida road trip earlier this year. Think it’s impossible to see all of Florida in 24 hours? Well, yeah you’re right. But we never intended to see the whole of Florida in such a minuscule amount of time – that would just be ridiculous. We only had one more day in Orlando and still hadn’t made it to two of Florida’s most popular destinations – Miami and the Florida Keys – so that was the direction we planned to head in.

This was a totally last minute decision by the way. For weeks Dan had been going on about how awesome it would be to drive a convertible in the US but we didn’t actually say screw it and book the car until our second last night in Orlando. Searching online for hireable convertibles in Orlando, we found a convertible Mercedes on the Sixt website for about $180 USD per day located at Orlando International Airport.

So once we booked the car, we needed to get a plan into action. Basically, we would pick up the car at 6am the next morning, keep it until 6am the morning after, drop it back at Orlando International Airport and then jump straight on our 8am flight to New York. This meant that we had only 24 hours to road trip from Orlando to Key West (like, pretty much the Caribbean) and back. Could we do it? Well, you’ll have to wait and see, won’t you.

Pulling out our trusty Google map, we worked out the distance and time it would take to arrive at each destination. From Orlando to Miami it was only 3.5 hours which was a relief because we were thinking it would be more like 5. That said, we did want to stop for breakfast on the way so we added an extra 30 minutes to the itinerary. The next part of the journey was going to take about the same amount of time but we were due to get some rain later in the afternoon which meant traffic could slow right down. Another hour was added for that reason.

By this stage we were looking at around 8.5 hours of driving time to get all the way down to Key West, plus the 30 minutes for breakfast, 1 hour for lunch and another hour for visiting Miami Beach. That would bring us up to 11 hours, then we would need another couple of hours to have a look around Key West and eat dinner before embarking on the 8 hour journey back to Orlando. In total, that was 19 hours of road tripping, which would have left 5 hours to park somewhere quiet and get some sleep.

Were we crazy? A little.

Early the next morning we were dropped off at the car rental company, which was located just a few streets away from the airport. To our dismay, they didn’t have any convertible Mercedes left to give us when we arrived. We were bummed out thinking they were going to give us the next best thing which probably wouldn’t have been a convertible and therefore, what was the actual point in any of this? I know, I know, the car shouldn’t matter but come on, the whole reason for this trip was to fly down the highway with the roof down and our arms up in the air, screaming road triiiiiipppp! Whether we would have actually done that is another thing.

Amazingly, as we were handed the keys to our 24 hour joyride, the lady at the desk told us that we’d been upgraded to a BMW 4 Series convertible. Yaasss! The Florida road trip was off to a buzzing start. Too bad it was 6:30am and freezing cold, otherwise we definitely would have had the roof down asap. As the sun began to rise and the sky turned pink, we slowly rolled away from the car park and out of view before stepping on the accelerator and flying off in style. 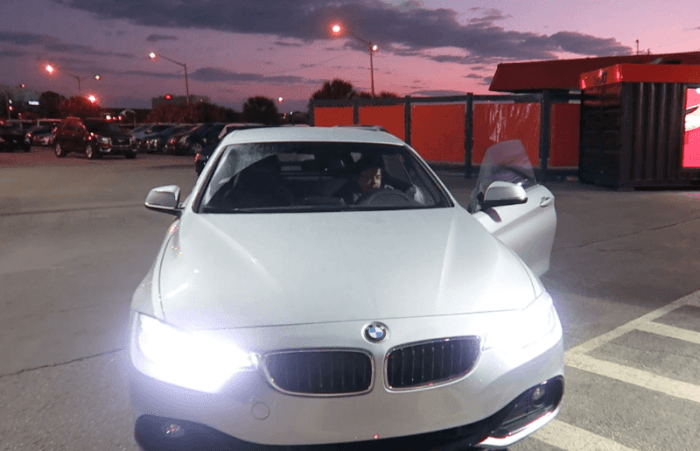 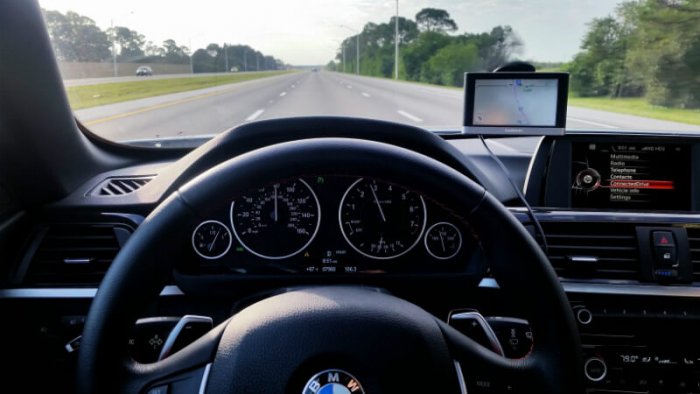 About an hour into the Florida road trip we stopped by a Starbucks on the side of the main road to get some much needed coffee into us. By this time it was completely light outside and the temperature had warmed up so down went the roof. We cruised for all of 10 minutes before if began raining so unfortunately, back up went the roof. So much for awesome convertible road trip! 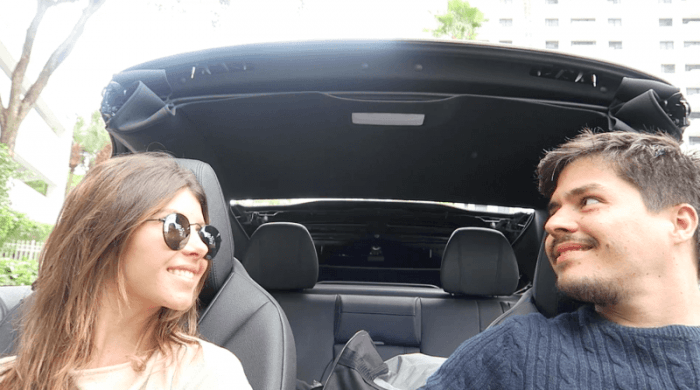 The road from Orlando to Miami was extremely easy to drive on and the traffic seemed to run pretty smoothly. If you leave at around 7 in the morning there’s a surprising amount of space on the road and you should skip most of the work traffic going into Miami. That said, we arrived in Miami Beach at lunch time on a Saturday afternoon so it was incredibly busy and we had a lot of trouble finding somewhere reasonably priced to park. We must have spent at least 30 minutes driving around looking for a car park. Eventually we found a spot on the side of the road further down the beach which was surrounded by plenty of nice restaurants and cafés. 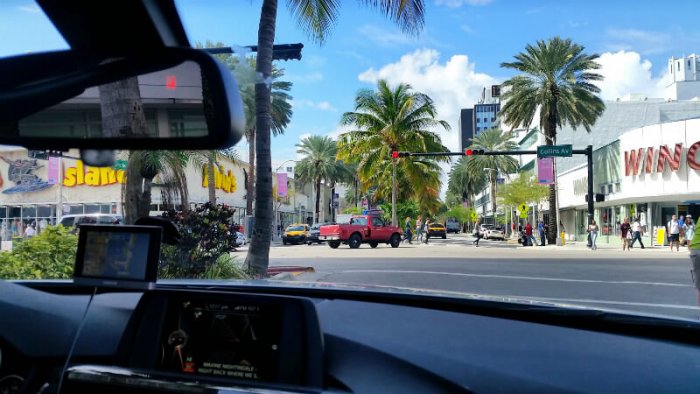 By now it was scorching hot and there wasn’t a rain cloud in sight. In fact, there was such a difference in climate between Orlando and Miami that we had to do a full outfit change in the car before getting out. That was more like it! The Florida road trip was beginning to take shape. 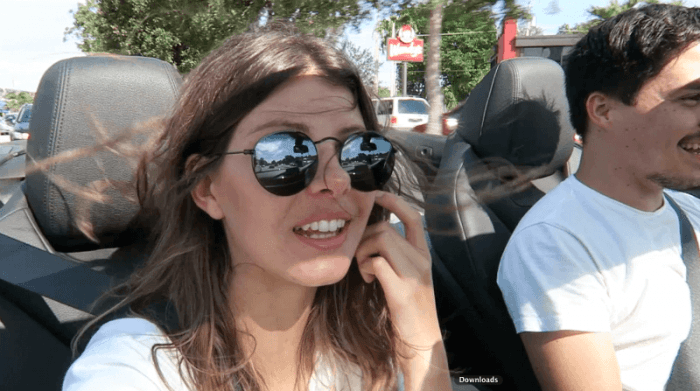 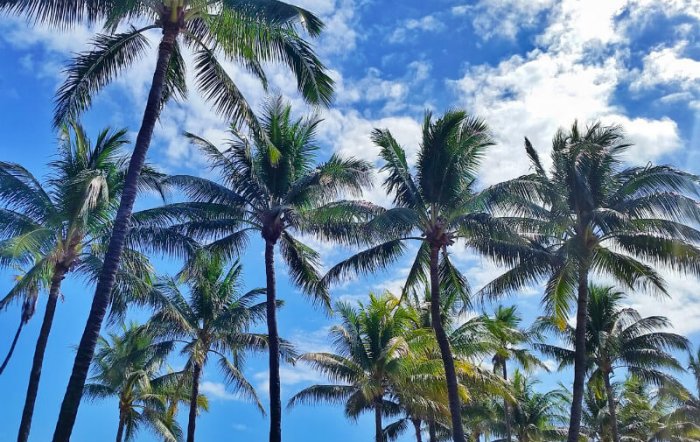 Although hungry, we didn’t have a lot of time so we made a relaxing stroll along the beach our first priority. Lined with palm trees and boasting bright white sand teamed with turquoise blue water, Miami Beach was a dream. Oh, and I can’t not mention the vibrantly painted lifeguard shacks dotted across the beach – they were super cute. Take some time out to bath in the sun, go for a refreshing swim or admire the beach from one of the bustling cafés above, it’s up to you!

Lunch was served up at a nearby café and juice bar called Fresh on Fifth where we enjoyed fried sushi, grilled salmon and a delicious açaí smoothie. If you’re looking to eat something fresh and light to match the warm Miami weather, this is the perfect place. The prices were also very reasonable considering the food quality and location.

Now it was time to bid adieu to Miami and continue onwards to Key West. Unfortunately it took us an incredibly long time to get out of the city as there was a massive boat show going on that weekend. To try and dodge the traffic we turned off at the bridge and ended up driving through the port, only to end up further back in the traffic. Florida road trip fail. At least we were able to see some stunning views of Miami city in the process. 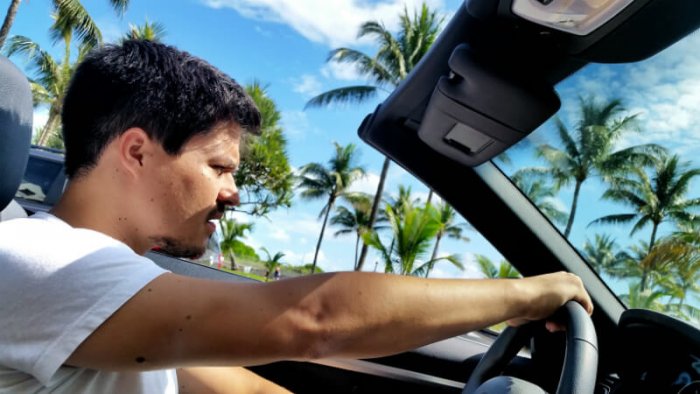 Eventually we made it out but we were seriously behind schedule. It was 2pm by time we were back on the road which meant that we wouldn’t arrive in Key West until at least 5:30pm. The main reason we wanted to drive down to the Florida Keys in the first place was to see the Gulf of Mexico. Something about that tranquil, aqua blue water drew us in from the very first Google image we laid eyes on but now we were worried that we were going to completely miss it during daylight hours.

About 45 minutes out of Miami we contemplated turning around and heading back to Orlando but then we decided, oh screw it and carried on driving… After all, we were on a spontaneous Florida road trip and we weren’t going to be returning to the US any time in the near future. It was approaching late afternoon and the traffic was slowing right down, just like we had anticipated. Rain clouds were beginning to form and the sky had turned from bright blue to grey. Things were not looking good but we tried to make lemonade anyway. 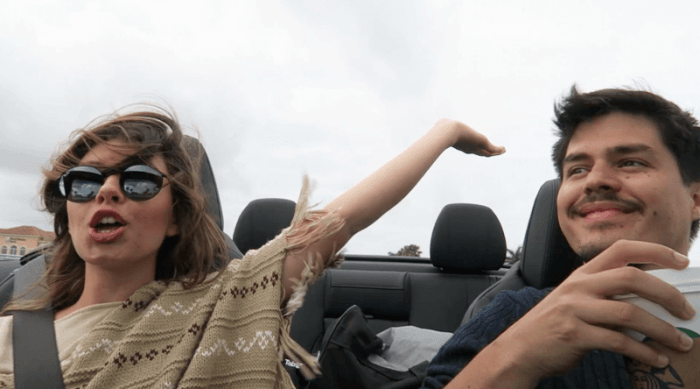 By 4pm we were finally on the incredible Overseas Highway, a 180km narrow bridge-like road which runs all the way down to Key West – yes, over the sea. This has to be one of the most scenic highways in the whole world, I’m not kidding. Imagine driving through the Gulf of Mexico (because that’s exactly what you’ll be doing) and literally all around you is luminous aqua blue water dotted with several small tropical islands. I really didn’t expect to see that but I’m so glad we did because a few minutes later, a massive storm hit.

Finding a little nook to pull over on the side of the highway, we waited and waited for the torrential rain to stop but it only seemed to get worse. At this point we realised that things weren’t going to work out the way we had hoped and that it was time to turn around and begin the drive back to Orlando. We were so close to Key West I could almost taste it yet something was telling us it wasn’t going to be this time. Much to our disappointment, we set the windscreen wipers to full speed and began our long overnight journey back to Orlando.

Arriving in Miami by 8:30pm we stopped by Miami International Mall, had something to eat in the food court and took some time to revive before continuing on. 3 hours later Dan was becoming too tired to carry on driving so we pulled in at a 24-hour roadside station, reclined our seats and slept for a solid few hours. Waking up at around 4am, we were back at Orlando airport in one piece by 5:30am, just in time to grab some breakfast before jumping on our flight to New York. How was that for timing?

So is it possible to road trip from Orlando to Key West and back in 24 hours? Well, even though we didn’t make it all the way, it is possible, providing you go on a clear day (preferably a weekday) otherwise you may face some setbacks like we did. More importantly, it’s the journey, not the destination that matters most so let down your hair and enjoy every minute of your Florida road trip, come rain or come sunshine! 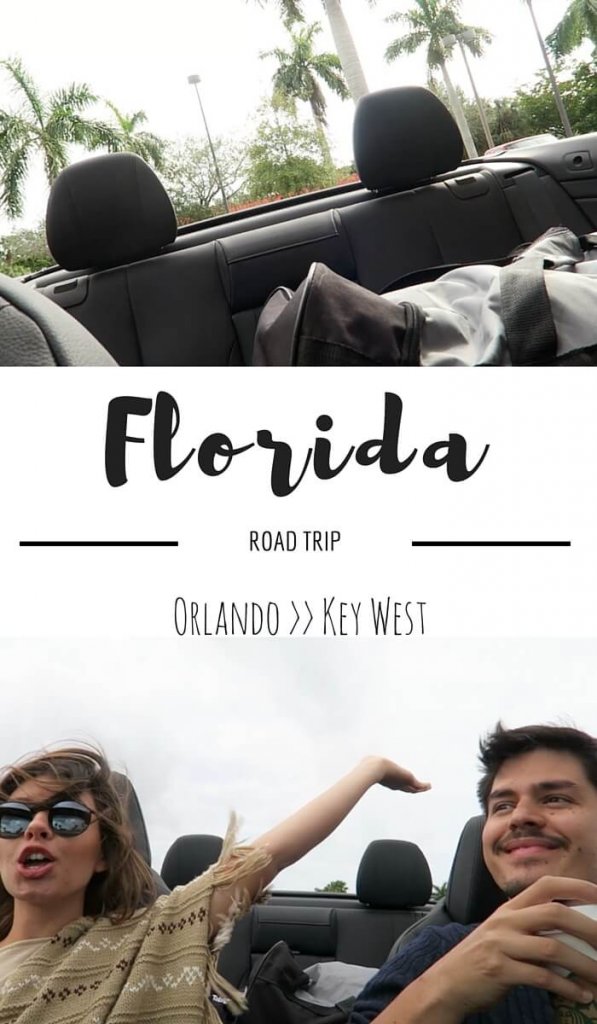 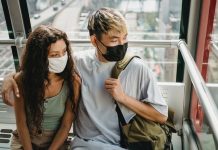