Germany, a country filled with a rich history, landscapes, and rich culture, is home to some of the most majestic and exquisite hidden gems: tall and mighty castles and fortresses built to protect towns or appease the whims of royalties.

These German castles range from being Medieval defensive structures, romantic fantasy palaces, and picturesque manor houses to mighty military forts. They all boast a colorful and rich history that will surely make you want to take your passport and go.

For now, let’s get our imaginations flying and discover the top ten grandest and most spectacular castles in Germany to feel as if we’ve walked the shoes of the kings and queens who inhabited these architectural miracles.

The Wartburg Castle dates back to the Middle Ages, which boasts an amazing history. Its biggest claim to fame was back in 1521 when religious icon and Protestant reformer Martin Luther sought refuge at the castle. It was given to him by Frederick the Wise, following his ex-communication by Pope Leo X.

It was in this place where he translated the bible from ancient Greek into German over a span of 10 weeks.

Despite being unused and unkempt, it was restored in the 19th century and is presently a major tourist attraction. The room where Luther stayed is open to the public, and the castle also provides a tour of the medieval banquet.

The Wernigerode Castle, a Romanesque-style castle, is located in the Harz Mountains in northern Germany. It was originally used as a hunting lodge for local rulers and noblemen in the 12th century, such as the German Kings, during their hunting trips in the Harz area.

When the line of the Wernigerode Counts died out in 1429, long after the establishment of the tiny village by the Count of Wernigerode, the castle fell into the hands of many other nobles through the Thirty Years’ War and eventually needed repairing and renovation.

Christian Earnest owned the castle in the late 1800s and had envisioned the castle to become a fairytale-style palace which was completed in 1893. At present, the castle is open to the public and lets visitors tour 50 rooms of the castle, which is more compared to the standard castle tours of a dozen rooms that are usually offered to tourists.

Another Neo-gothic style castle, the Reichsburg, dates back to 1000 AD, built by Count Ezzo with his wife, Matilda, daughter of Holy Roman Emperor Otto II. The castle was restored in the 1800s after the damage inflicted upon by the French, however; the majority of the original castle remained untouched.

Considered one of the smallest castles, the Reichsburg Castle still deserves to be on the most coveted and visited castles in Germany because of the scenery surrounding it — a row of colorful houses near the wine-terraced banks of the Mosel River, Cochem.

When Conrad III, King of Germany, stayed in the castle in 1951, the castle officially gained its Imperial status. Now, it is held to its roots and offers tourists great ghost tours, a knight’s meal, and a Medieval feast.

One of Germany’s newer castles, the Lichtenstein Castle, was built in the 19th century to honor the Lichtenstein’s medieval knights. The neo-gothic castle sits atop a hill in the Swabian Alps near Honau, accessible only by a stone bridge connected to another hill.

In the 1800s, the cliffside castle became a royal hunting lodge and was bought by Count Wilhelm of Württemberg in 1837. The foundation of the original Medieval fortress could still be seen when touring the castle at present.

Currently, the fourth generation of Count Wilhelm’s family is in charge of running the Lichtenstein Castle.

The Schweriner Castle is a dreamy architectural masterpiece that sits on an island in the middle of Schwerin lake. The lake is Germany’s third-largest lake, with Slav tribes inhabiting the area as early as 973.

When the Germanic tribe and noblemen battled for the castle, the place fell under the local Dukes’ hands. The castle was rebuilt in the 1500s, but it was Duke Friedrich Franz II who remodeled the castle in 1850 into the Schweriner that you see today.

It boasts 653 rooms with an overlooking view of the lake. The castle is considered to be a prime example of Europe’s historicist architecture. Today, the castle serves as a museum and government building for the Mecklenburg-Vorpommern state parliament.

The Heidelberg Castle is a complex with a combination of a variety of styles from different eras, making it a unique structure. The castle was built in 1196, followed by the lower castle’s construction in 1212, which was completed in 1225. In 1410, Holy Roman Emperor Rupert III decided to turn the castle into his own and added a touch of his style during the castle’s expansion. 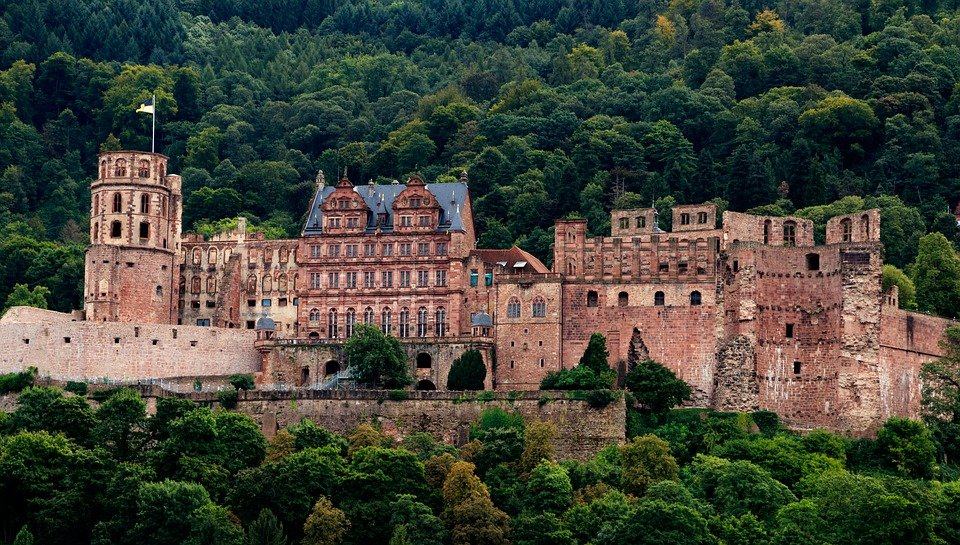 The castle houses the world’s largest wine vat; the Heidelberg Tun built in 1751, a huge wooden barrel that is 23 feet tall, 28 feet wide, and can hold over 58,000 gallons of wine. Prince Elector Karl Theodor built it to store huge amounts of wine he received as tax payments.

The then Crown Prince Maximillian II discovered this beautiful bright orange castle, who bought the castle’s ruins and had it renovated because of the immense pleasure he got from viewing the castle’s vicinity.

After the renovation, Maximilian turned the palace into a hunting lodge and summer abode.

The castle is well decorated, with interesting rooms and a neo-Gothic architectural style. The Hohenschwangau Castle is where Maximilian raised his son, Ludwig II, who would soon reign as king after his death.

The Burg Eltz in Münstermaifeld, Germany is situated near the Moselle River between Koblenz and Trier. It was home to the Rübenach, Rodendorf, and Kempenich families since its construction in the 12th century, and has been in the care of 33 generations of these families since 1157.

It is also one of the three castles in the Rhine River region from Medieval times that has not been destroyed nor rebuilt. Burg Eltz’s medieval architecture is unique, especially because the castle had never borne witness to war.

The castle boasts some of the original furnishings, and its armory of gold and silver artifacts is considered to be the best in Europe. The castle was also shown in the 1979 movie, “The Ninth Configuration.”

Atop Mount Hohenzollern is the Hohenzollern Castle, a romantic castle home to the Prussian Royal family since 1061 AD. The castle served as the family’s ancestral seat and contains several artifacts of their rule, such as the crown of Kaiser Wilhelm II and the uniform worn by Frederick the Great.

Although the Prussian Royal family privately owns the castle at present, the castle remains open to the public and is still one of the most visited castles in Germany. The tours are quite unique as the guide will be wearing authentic Medieval attire lets you travel back in time to the Medieval era.

The castle is also said to inspire images of dragon myths because of its wonderful location on top of the mountain.

Topping the list of the most beautiful German castles is the Neuschwanstein (New Swanstone) Castle, the crown jewel of Europe’s fairytale castles. Tucked on the edge of the South of Munich mountains, this castle served as the inspiration of Walt Disney’s Sleeping Beauty castle because of its breathtaking overlooking view of a lake, timeless design, and spectacular interior.

The most photographed building in Germany, built in the late 1800s, was never really built for defense purposes. King Ludwig II of Bavaria commissioned the castle as a fanciful private retreat for himself and a dedication to his obsession over the opera composer Richard Wagner.

While the interior is adorned with chandeliers and beautiful paintings, nothing could live up to the entire third floor, which is devoted to Ludwig’s fascination over swan scenes from Wagner’s operas. When Wagner went broke, he was welcomed by Ludwig into the castle, where he wrote some of his best works. The castle became open for the public a week after Ludwig’s death in 1886.

Castles are truly wondrous art pieces that appeal to our visuals and are bold statements on the rich history and wonderful stories immortalized in every wall and corner. They allow us to reconnect with the past and transport us to a time of grandiosity, elegance, and extravagance.

Indeed, these timeless architectural masterpieces show us the greatness of humanity and its potential to withstand centuries. So what are you waiting for? Time to start moving and turn your imagination into reality and walk in the shoes of a royal.