‘A Spectacular of Lights’. Held every night from 8pm the multimedia show involving over 40 buildings along Victoria Harbour lights up the sky with coloured lights, laser beams and searchlights performing to synchronised music and narration. This spectacle celebrates the energy, spirit and diversity of Hong Kong.

As we stood gazing at the ‘World’s Largest Permanent Light and Sound Show’ from the other side of the harbour we were amazed firstly, by the pure cost that would go into providing a light show so extravagant for free to the public every single night and secondly, how they managed to even achieve such a thing? Nonetheless it was beautiful, in a techy kind of way. We recommend getting there early to secure a good spot otherwise you’ll end up with heads photo – bombing your photos from all angles! 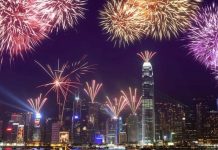