San Francisco is infamous for its annual fireworks show over the bay. The massive show requires two sets of fireworks — one at the end of the Municipal Pier and the other on barges in front of PIER 39.

It’s truly a spectacular show, and one that you won’t want to miss if you’re anywhere near the Bay Area. The 30-minute display typically starts just before 9:30 p.m, or as soon as it’s dark enough.

Many visitors often question the best places to go to for the best view of the fireworks show. If you’ll be in the San Francisco Bay area this Independence Day, here are four unique ways you can see fireworks that you can’t quite find anywhere else.

Not only does Fisherman’s Wharf have a great 180-degree view of the fireworks display, but it’s also the most famous waterfront community in San Francisco with a ton of historical value.

Head over to PIER 39, a part of Fisherman’s Wharf, in the afternoon to spend some time shopping, listen to the live entertainment and then enjoy a meal at one of the community’s many restaurants.

If you stay at the PIER for the show, the best viewing area is along the perimeter road, toward the Bay End.

All businesses at the PIER will be open until at least 9:30 p.m, and some could stay open even later. The event, including a special exhibit west of the entrance plaza, will begin at 11 a.m.

If you want to switch up your location after shopping around at PIER 39 during the day, Aquatic Park is also near Fisherman’s Wharf, so you can easily head there to enjoy the city’s annual celebration.

The city will provide the following free live entertainment:

The extravaganza lasts from 6 to 10 p.m.

If you’re looking for the absolute best seat in the house, this is it.

Take a cruise along the bay with views of the Golden Gate Bridge, Alcatraz Island and the illuminated San Fran skyline. Watch the sky light up right over your head.

Red and White Fleet offers a two-and-a-half-hour cruise along the bay with boats departing Pier 43½ at 7:45 and 8:15 p.m. Drinks and snacks can be purchased from the bar while on board.

If this sounds like the perfect route for you, make sure you book very soon — this cruise typically sells out about two weeks before the 4th.

Also, the weather on the bay can be unpredictable, so make sure you come dressed comfortably and in layers.

4. Get a Reservation at a Restaurant with a View

What’s better than relaxing after dinner with a few drinks and good company while watching fireworks light up the sky?

If you do end up taking your business to PIER 39, you should consider calling in early to try for a spot at one of the pier’s bayside restaurants with a view.

These restaurants are all located right on the pier, so you won’t have to move a muscle after dinner to get the best view of the show.

If you’re wondering whether you can watch the fireworks from the Bay Bridge, don’t worry, you’re not alone — many people wonder if this is an option.

Unfortunately, the walkways on the bridge close at 9 p.m, just before the show starts.

We’d recommend walking along the bridge just before sunset, but going with one of these four options for your actual fireworks viewing location.

The San Francisco Bay fireworks show could be one of the most incredible Independence Day displays you’ll have the opportunity to watch. If you get the chance to see it, make sure you do it right.

Remember where you need to go for the fireworks in San Francisco this Independence Day. Save this on Pinterest >> 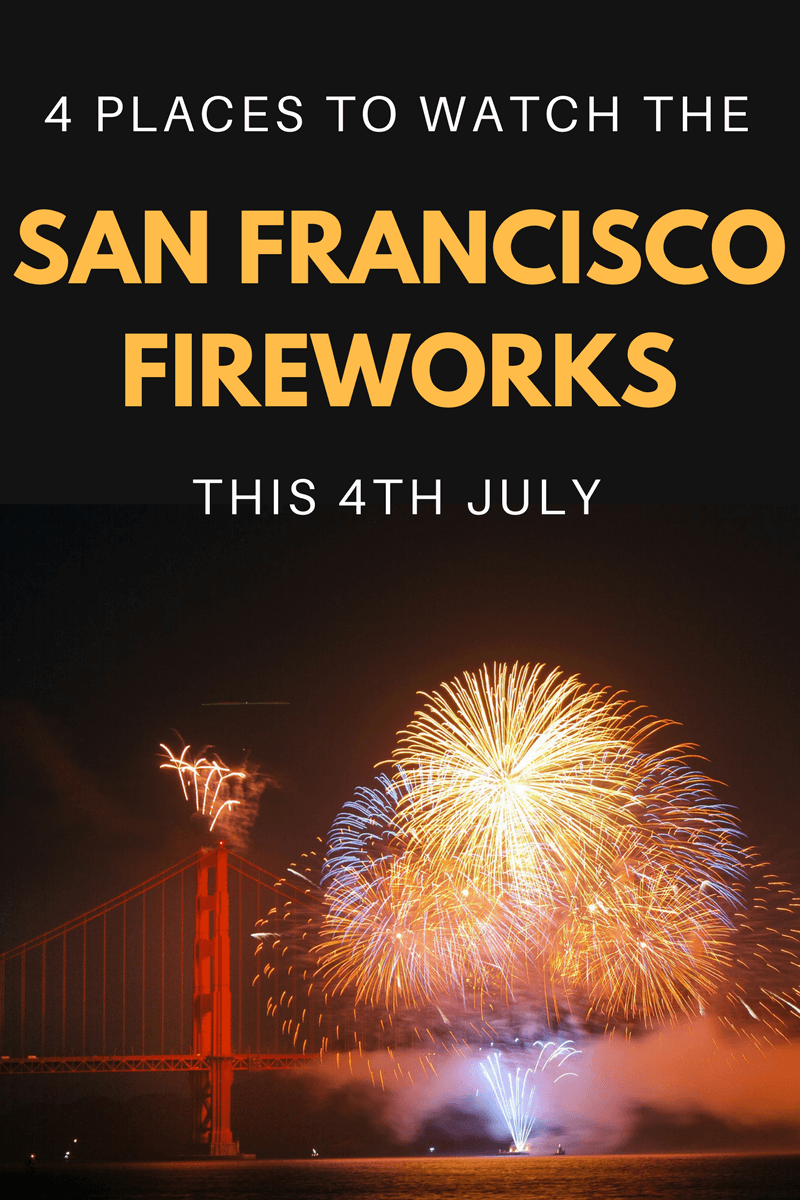