The Falkland Islands is a destination that will surprise you with its raw beauty and astonishing fauna and flora. It’s a place where you will be transported back in time, yet you’ll most definitely want to come back to in the future.

With over 700 islands in the archipelago, it’s not easy deciding how to spend your time in the Falklands. With a mix of wildlife, walking, history and adventure – this 2-week itinerary is designed to make the most of what the Falkland Islands have to offer.

But first, pin this for future reference >> 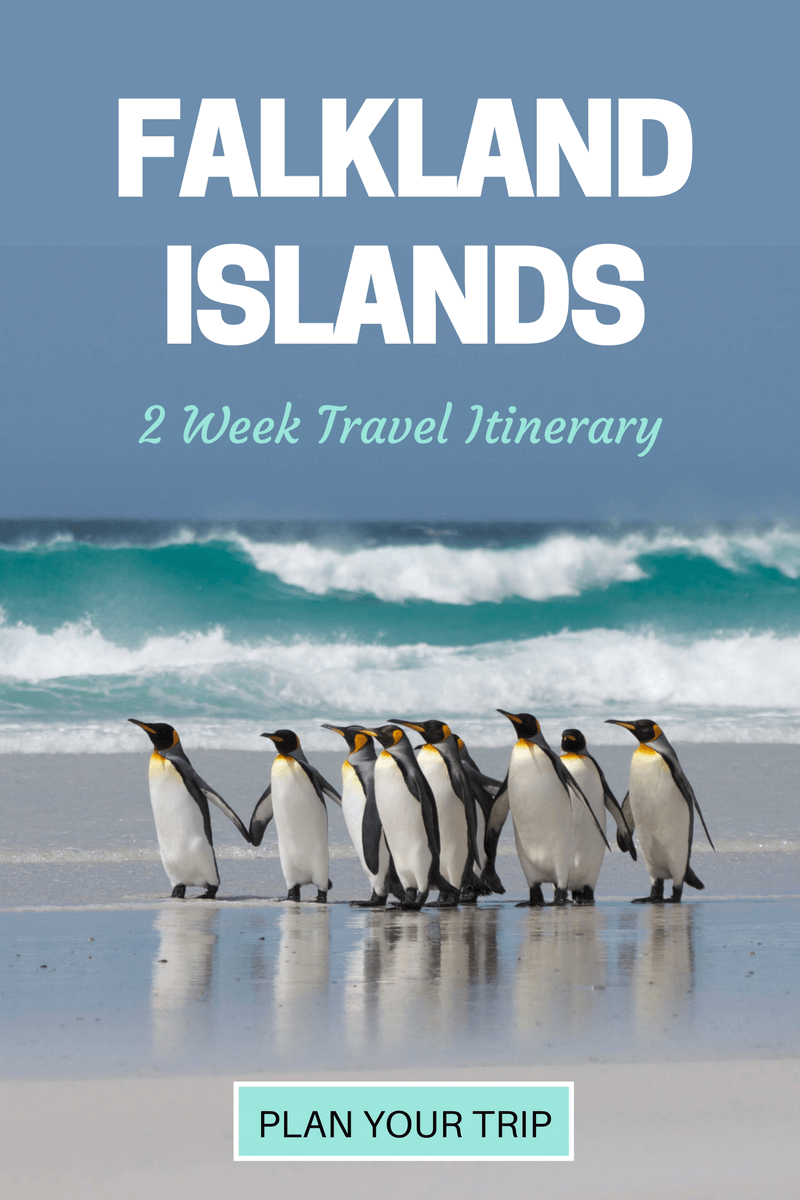 Day One – Arrival into East Falkland

Most flights into the Falkland Islands arrive in the afternoon, so after driving from Mount Pleasant Airport to the capital, Stanley (approx 1-hour), there might only be time for a quick freshen up before dinner.

Stanley is home to a number of great restaurants and many accommodation providers will also offer dinner in-house. Then have a good night’s rest and wake up ready for the adventure to begin!

Volunteer Point is one of the most magical places in the Falklands.

Experience the islands’ largest King penguin colony (also the world’s most accessible!), and mingle with Gentoo and Magellanic penguins on a dazzling beach.

Many local tour drivers offer transport to Volunteer Point – a 2-2.5hr drive from Stanley. Part of the journey is off-road so a driver who is experienced with the terrain is essential! 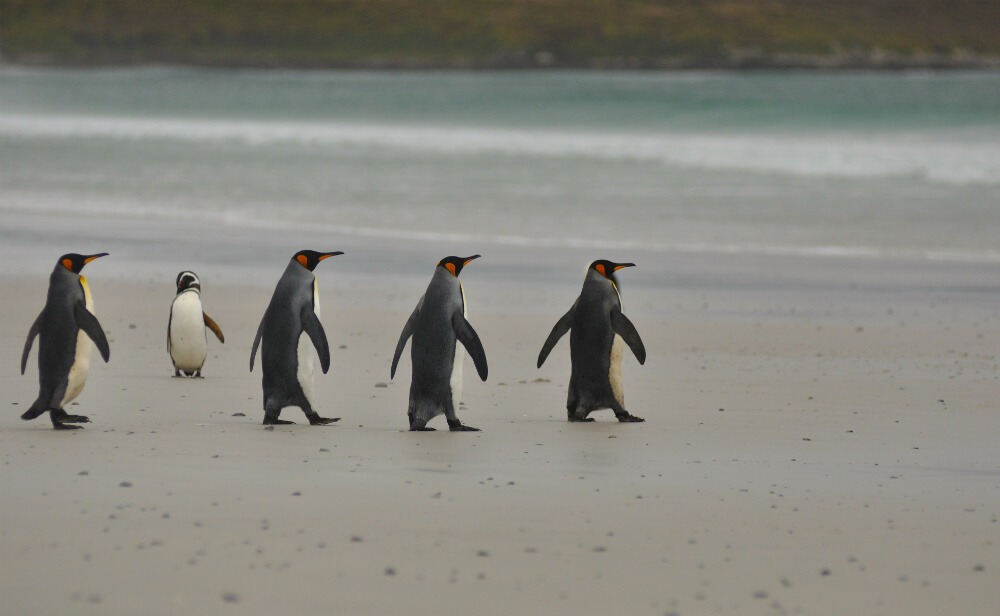 Discover the war relics on the island, including the remains of a Skyvan, an SAS commemorative cairn, and several Argentine Daggers.

Visit an impressive Rockhopper colony perched on a rocky cliff face. Observant visitors may even be able to catch a glimpse of a rare Macaroni penguin! Several Gentoo and Magellanic colonies can also be found on this half of the island. 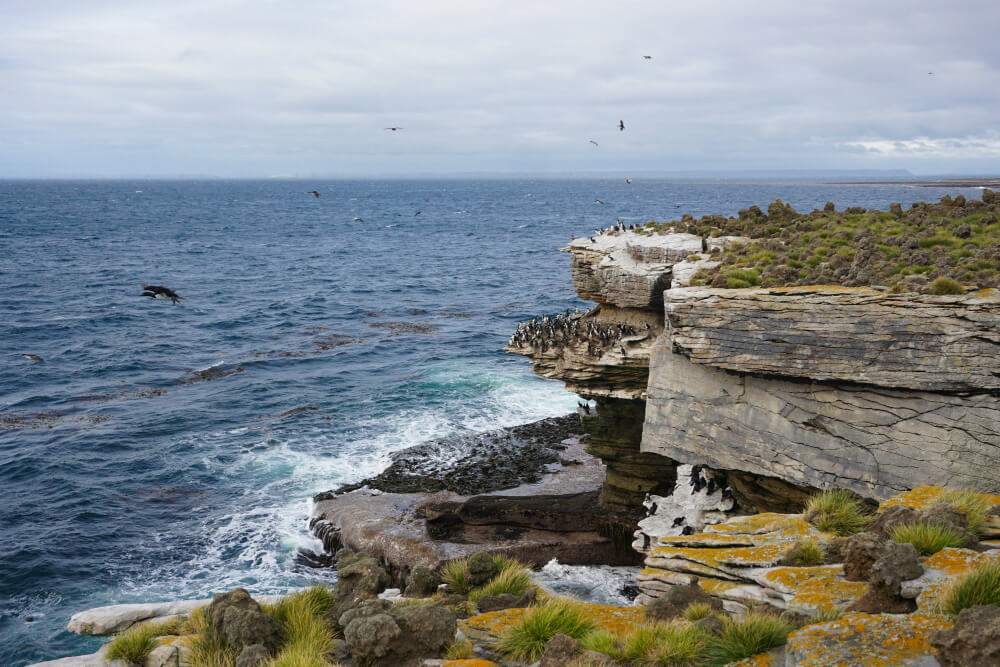 West Falkland is home to the longest beach in the Falklands. Elephant Beach is a beautiful stretch of sand spanning over 4 miles! It’s a favourite for Gentoo penguins, and be sure to look out for Commerson’s dolphins swimming offshore.

Drive the ‘Penguin Coastline’ with its concentration of Magellanic penguins, count how many of the 18 resident species of waterfowl you can spot in the wetlands, and then carry on to the cliffs of Cape Tamar to find shags, sea lions and turkey vultures. 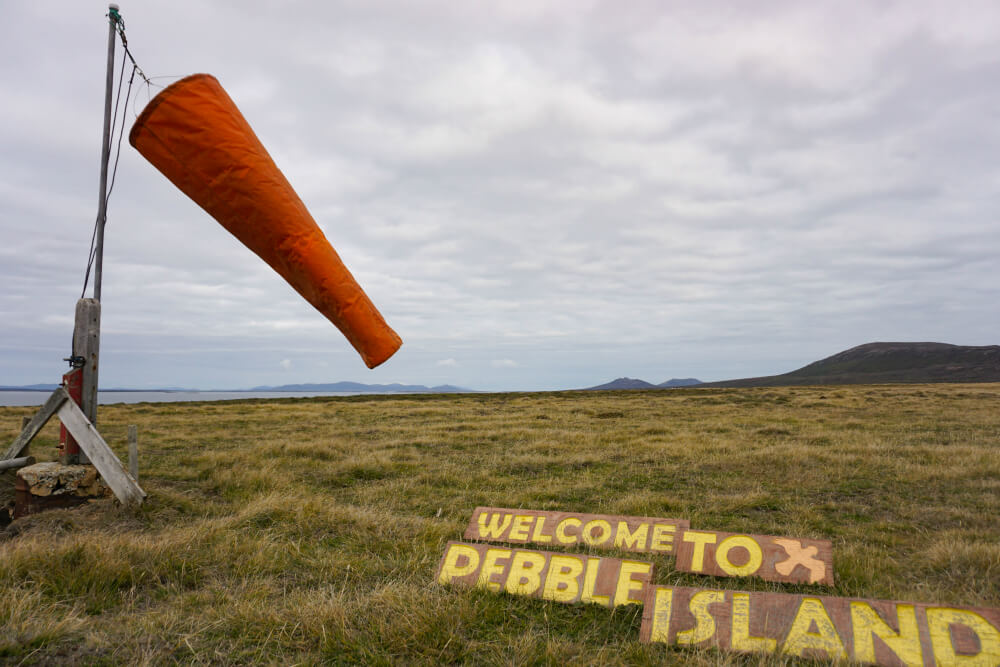 Before doing anything else on Carcass Island, it’s essential to pop into the lodge for smoko (the local name for morning or afternoon tea). The spread on Carcass Island is world-famous in the Falklands!

Then take lunch to go as you set out for Dyke Bay. It’s an easy walk that takes in the southern end of the island.

Several Gentoo and Magellanic colonies can be found along the way, and you’ll be rewarded with breathtaking views! 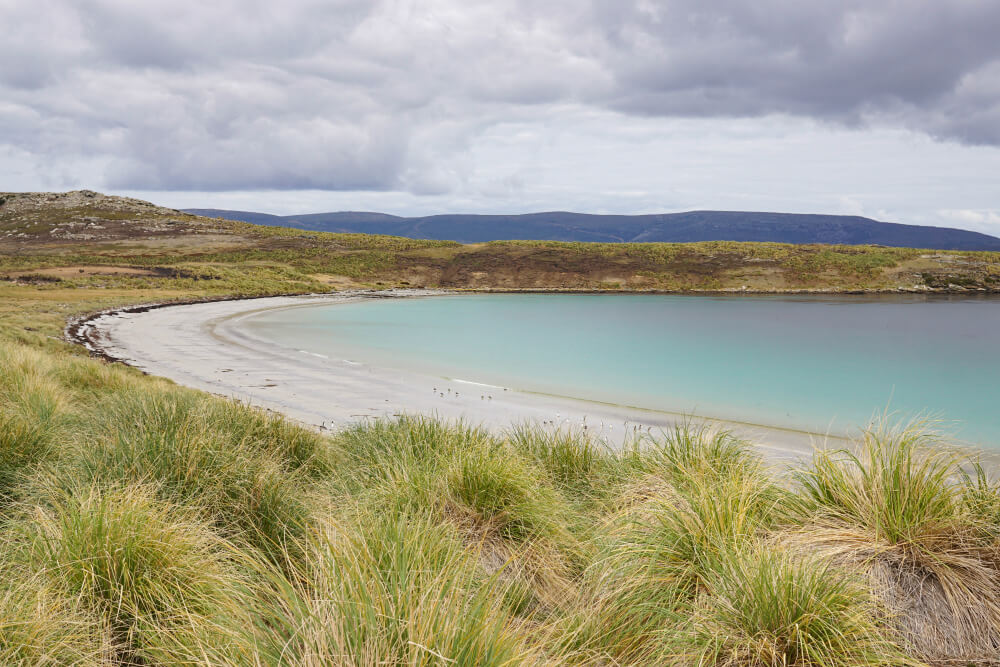 From Carcass Island you can take a ferry (book in advance) to West Point Island. The journey is an attraction in itself as dolphins and the occasional whale make an appearance alongside the boat.

West Point Island is an island of dramatic scenery and abundant bird life. The main attractions are the large colonies of Black-browed Albatrosses and Southern Rockhopper penguins. 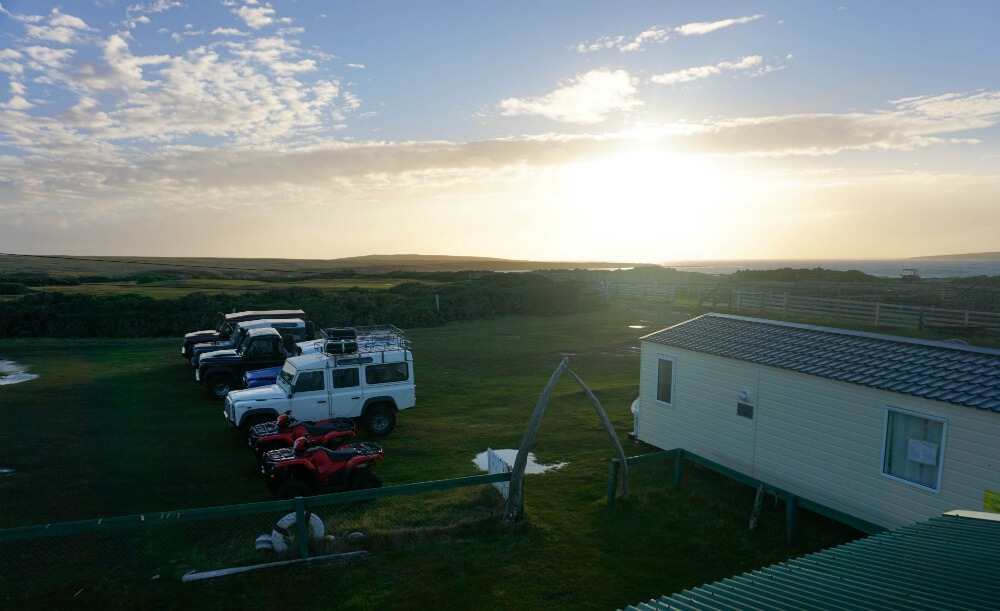 After arriving in Weddell Island, enjoy an early lunch before heading out to explore on foot.

Those who are feeling fit should head to Mount Weddell – the highest peak on the island. Climb to the summit to take in the 360-degree views and be back down in time for dinner.

If a more gentle walk is on the cards, head north of the settlement towards Mark Point. Look out for the island’s resident Patagonian foxes and reindeer as you make your way past the Gentoo colony, to stunning beaches littered with whalebones. Book a tour of the island to really appreciate its scale and diversity.

Watch the busy Rock cormorants in their colonies, visit hoards of sea lions, count the number of bird species that can be seen, and look out for both the Black-browed Albatrosses and dolphins offshore – all while learning about the island’s history and heritage from a knowledgeable guide.

Visitors to Sea Lion Island don’t even have to leave the lodge to see penguins, but it’s worth the effort!

Walk directly out towards North East Point and in a very short time frame you’ll be surrounded by penguins (Gentoo and Magellanic), sea lions and elephant seals.

Take the time to appreciate the beauty and scope of the wildlife during the course of the afternoon. And look out for Orcas – the high volume of young seal pups on the island attracts these opportunistic marine mammals. 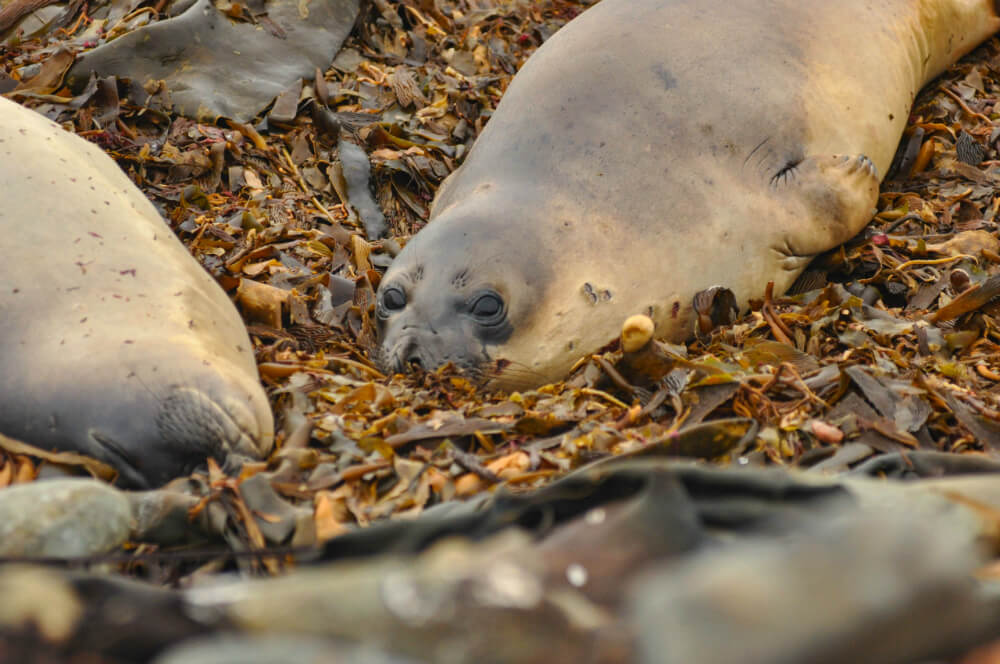 There are two ways to see the best of what the island has to offer. On foot, or by 4WD.

The island is flat, and at only 5 miles long by 1.5 miles wide, it’s easy to walk around in a day. Sea Lion Island is not farmed, so there are no gates or fences to clamber over either.

Alternatively, the lodge offers tours to visit the wetlands, Rock cormorants and colony of Rockhopper penguins on the further reaches of the island.

Starting at Darwin, walk up and over the small hill towards Goose Green, stopping to appreciate an old stone corral used by gauchos in the 19th century and to pay your respects at the 2 Para Memorial.

Arriving in Goose Green a short while later, take a walk around the peaceful settlement, pausing to peer in the windows of the community centre where locals were held hostage during the 1982 conflict, and to appreciate what’s rumoured to be the world’s largest sheep shearing shed.

Those up for a more strenuous walk can push on to Bodie Creek where the world’s most southerly suspension bridge stands. While it’s no longer in use, it still makes an impressive and slightly surreal sight!

Welcome the day by watching the sunrise over Choiseul Sound before driving, or taking a tour to the Argentine Military Cemetery, and then the British War Cemetery at San Carlos.

San Carlos is also home to a small but moving museum dedicated to the war and history of the islands. From here you can drive back to Stanley in roughly two hours. 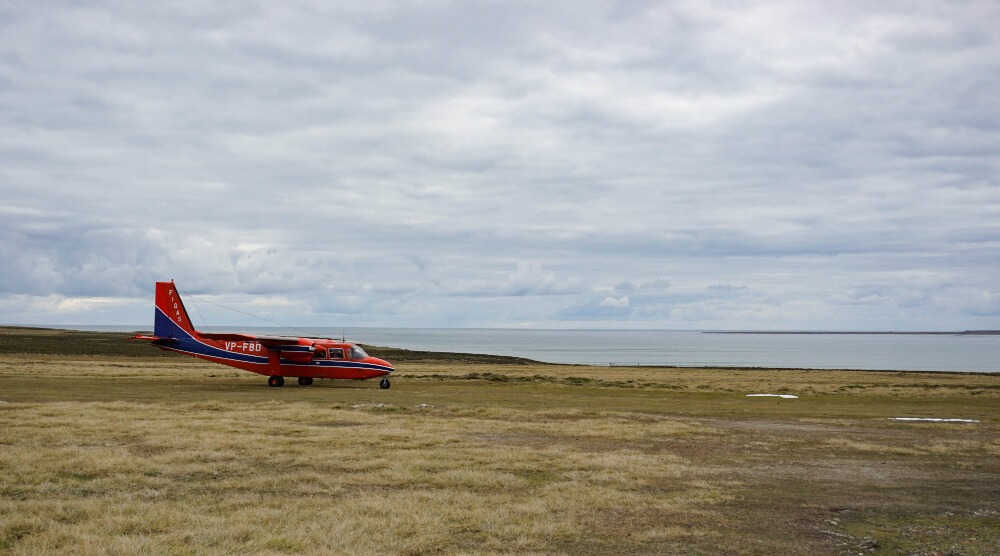 Head out of town towards the stunning Gypsy Cove and Yorke Bay. On the way, you’ll pass Whalebone Cove where the shipwrecked Lady Elizabeth rests at an ungainly angle.

Arriving in Gypsy cove, leave the car in the dedicated lot before proceeding on foot along the short walkway to the lookout point. Magellanic penguins peek out of their burrows right next to the walkway!

The beach is off limits due to ongoing work to clear the area of landmines, but the view from the lookout is well worth the trip.

Then proceed to Cape Pembroke to visit the lighthouse (purchase access for a small fee and get the key from the museum beforehand) and the Atlantic Conveyor Memorial.

Pop into the Falkland Islands Museum on your return to Stanley to give back the key and have a browse of the interesting and informative exhibits on display.

If time permits before your flight out of Mount Pleasant, be sure to take a stroll in Stanley.

Visit the Christ Church Cathedral and whalebone arch, buy some souvenirs from the art gallery or gift shops and wander the waterfront pathway with its memorials and statues. With so much to do and see in the Falkland Islands, it can be hard to decide just how to spend your time and money exploring the islands. This 2-week itinerary will give you a great taster of what the Falklands has to offer, while still leaving room for you to explore further on your next trip!