It’s no secret that the quintessential Alpine country of Switzerland is on almost everyone’s bucket list.

And while Switzerland is known for snow sports and other adventurous outdoor activities, most people miss out on one of the best things this country has to offer…

Spectacular train trips with scenery to die for!

Are these scenic train trips in Switzerland sparking your wanderlust? Save this on Pinterest for quick reference >> 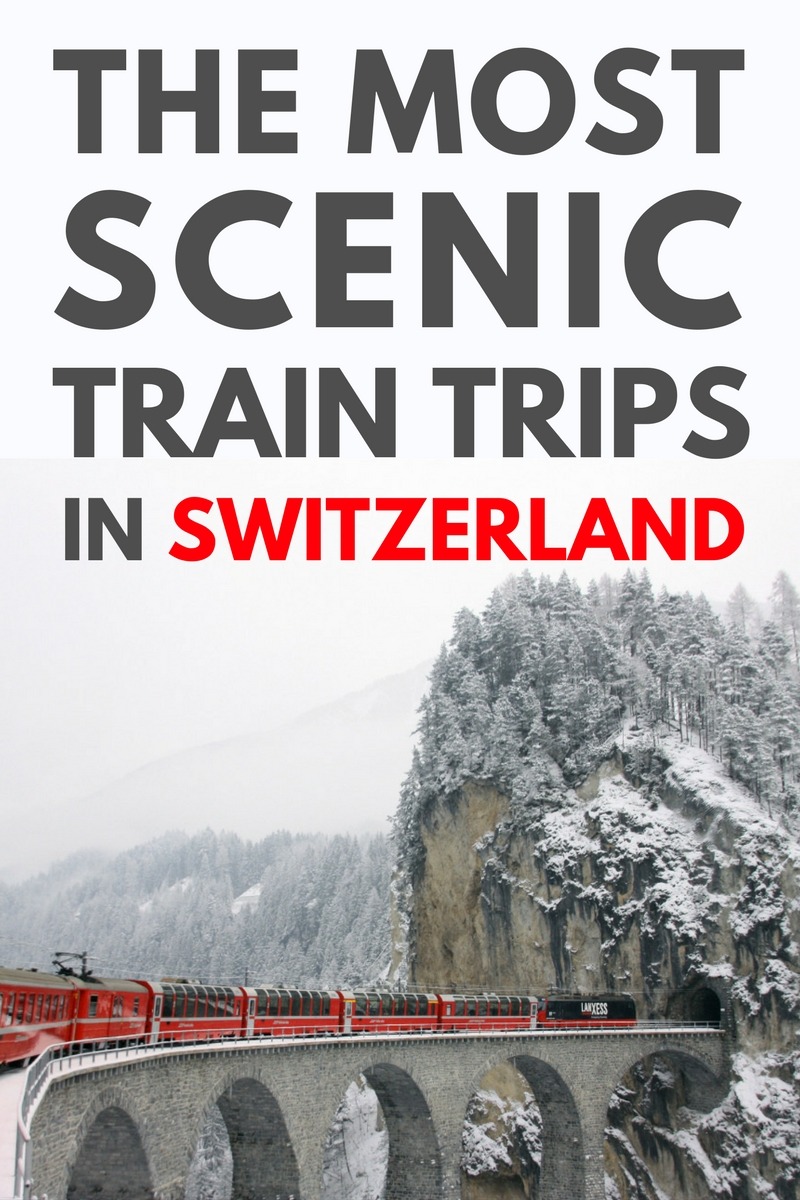 In Switzerland there is a huge variety of train trips that can take you on some of the most scenic rides across the country.

Depending on your itinerary, the trips can last anywhere from two hours to a full day.

Of course, being Switzerland, some of these are pricey, especially when you travel longer distance.

However, despite that, there is no more efficient, convenient, and breathtaking way to experience the natural wonders of Switzerland than traveling through tunnels, between mountain passes, and over sparkling clear rivers – all in the comfort of a train.

In this post, I want to highlight the best of the best for you when it comes to train trips in Switzerland, so you can make the most of them on your next visit.

The Glacier Express is epic and quite a commitment, because the complete route takes over seven hours.

It travels a distance of 290 kilometres between Zermatt, at the foot of the Matterhorn, and St. Moritz in the Engadin ski region.

It is possible to join the trip anywhere in between, but the Glacier Express is the most popular train route in the country for a reason…

Also known as the “world’s slowest express train”, it will take you past a huge variety of landscapes, through valleys full of mountains, along deep gorges, inside 91 tunnels, and across 291 bridges.

And there is good reason the train only travels 24 mph, and that is so that it can safely squeeze through passes and take sharp curves that often follow the mountain’s curves.

The train climbs as high as 2,044m (6,706ft) above sea level while crossing the Oberlap Pass, which is also accessible via car, but is considered one of the most dangerous roads in the world.

Meals are also served during the trip, which you can enjoy whilst watching the landscape pass by through insanely large panoramic windows.

The Bernina Express is one of the best ways to travel between Switzerland and Italy, especially if you are in the south-east of the country.

No train ride in Switzerland is complete without bridges and tunnels, and this one takes you through 55 tunnels and across 196 bridges.

In the summer, the trip can take you all the way to Lugano in Ticino, a Mediterranean/Italian-inspired city sitting just outside the Lake Como region.

This part of the trip is taken by bus.

Just like the Glacier Express, huge panoramic windows allow you to watch the ever-changing scenery as it moves from glaciers to palm trees as you slowly make your way to Italy.

What makes this trip truly stand out, however, is its passage over the 65-meter-high Landwasser Viaduct, which is an iconic part of the Rhaetian Railway and has earned a UNESCO World Heritage status.

For those who want a little bit of everything, the Golden Pass Line is the Swiss train trip for you…

It takes you past eight of Switzerland’s magnificent blue lakes, through six cantons (the Swiss version of a state), over three impressive mountain passes, and between two language regions (French and German speaking Switzerland).

The trip takes you from Lake Lucerne to the vineyards of Geneva, and is also a great scenic option if you need to go from Zurich to Geneva but have a little more time on your hands.

Taking the whole trip involves switching trains several times, but it’s worth it.

The first part, starting from Lucerne, takes you to Interlaken via several lakes, over the Brünig Pass, and around the Giessbach waterfalls.

The second leg from Interlaken heads towards Zweisimmen, passing along Lake Thun, and on to another train switch into the valley towards Montreux.

This last part of the trip offers views of iconic Swiss chalets situated in the valleys with a picturesque backdrop of mountain peaks in the distance.

Despite several train changes, any train pass covering Switzerland is valid on the Golden Pass Line.

Some trains and cars do require reservations, so it will be best with the local train stations, especially when you want a good seat.

Ever wonder how it feels to be on top of the world?

Jungfraujoch can get you pretty close.

At 3,454m (11,332ft) above sea level, the Jungfraujoch Station is the highest in all of Europe, which has earned it the nickname “Top of Europe”.

The station sits just to the side of the mountain saddles which connects the Jungfrau and Monch peaks, two of the highest peaks in the country.

The trains going to Jungfraujoch depart from Kleine Scheidegg, which, in turn, can be reached from either Interlaken, Lauterbrunnen, Wengen, Murren or Grindelwald, all popular bases in the area.

The mind-blowing part really happens after Kleine Scheidegg, which is over 2,000m itself.

To reach the Jungfraujoch, the train has to pass through the impressive Eiger mountain. Not an easy feat…

The tunnel was constructed in 1896 and took 16 years to complete.

It’s not all darkness though, as the train makes two short stops along the way at Eigerwand and Eismeer.

At Eigerwand, you can get off the train for a short time to look down the Eiger North Face (a sheer wall some insane climbers scale in summer) or at Eismeer where you can see an endless view of snow and ice (aka a glacier).

Once at Jungfraujoch, there are lots of things to do including visiting shops, chocolatiers, and, of course, a fun park for snow sports and hiking.

The main attraction though is the Ice Palace, first created in the 1930s, but now shows modern artistry carved into smooth walls of ice. 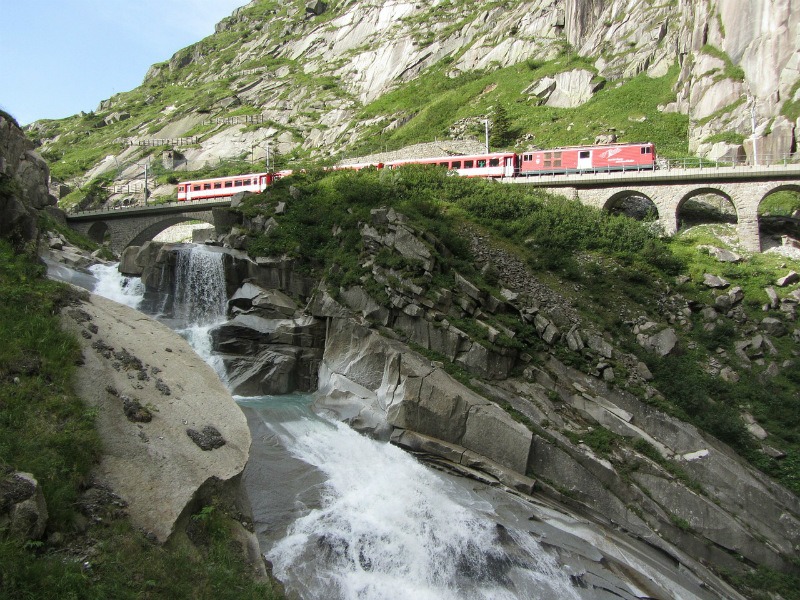 This journey lasts five hours, and takes passengers on a unique trip to see the “original Switzerland”.

Perhaps the most interesting part of the Gotthard Panorama Express is the combination of a boat and train ride from Lucerne all the way to Bellinzona in the southern part of the country.

The trip begins with a ride on a steamboat across the spectacular Lake Lucerne, which then connects to yet another a scenic train ride from Fleulen.

The train then winds its way through the Reuss Valley and climbs the historic Gotthard railway tunnel.

The tunnel was built in 1882 and has since then been regarded as an engineering marvel.

It has only recently been replaced by an even more impressive tunnel, now the longest in the world (but that one is less fun than this).

The train then takes you to Ticino (Swiss Italy), traveling through quaint villages on the way to Bellinzona or Lugano.

This was one of my first train trips in Switzerland and still impresses me.

It is “just” a train ride from north to south, but also surprises you with spectacular views and some hidden corners of the country.

Undeniably a big part of Swiss history, the Gotthard Panorama Express is well worth the ride!

=> Search For Airbnb Accommodation In Switzerland ($35 discount on your first stay!)

=> Search For Cheap Flights To Switzerland

Have these scenic train trips in Switzerland sparked your wanderlust enough to want to know more about traveling in this incredible country? Ask all your Switzerland travel related questions in the comments section below!